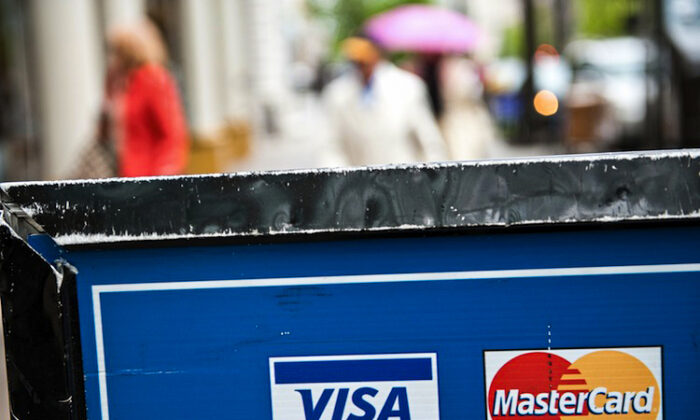 Visa and MasterCard credit card logos are seen on a sign in Washington on March 30, 2012. (Nicholas Kamm/AFP/Getty Images)
Companies

U.S. payment card firms Visa and Mastercard have blocked multiple Russian financial institutions from their network in compliance with Western sanctions, the companies announced in separate statements on Monday and Tuesday.

Visa said it has watched the “tragic scenes in Ukraine with deep sadness and disbelief” and “is taking prompt action to ensure compliance with applicable sanctions, and is prepared to comply with additional sanctions that may be implemented.”

The company is also donating a $2 million grant to the U.S. Fund for UNICEF to support humanitarian aid for the people of Ukraine and will double match all employee donations, up to $1 million, to the Ukraine response funds of UNICEF and the Red Cross.

In a similar statement, Mastercard said it has blocked “multiple financial institutions” from its payment network in response to sanctions.

“As a result of sanction orders, we have blocked multiple financial institutions from the Mastercard payment network.  We will continue to work with regulators in the days ahead to abide fully by our compliance obligations as they evolve,” the company said.

“Given the unfolding emergency, we are also working with our partners to direct funding and humanitarian aid where it can provide the greatest impact. Today, we announced a $2 million contribution to the Red Cross, Save the Children, and our employee assistance fund for humanitarian relief. We will actively pursue additional opportunities to assist aid organizations to play our part in supporting the global relief effort,” Mastercard said.

The announcements come after officials in Ukraine urged both Visa and MasterCard to halt transactions on Russian credit and debit cards amid Moscow’s invasion of the former Soviet nation.

Kyrylo Shevchenko, governor of the National Bank of Ukraine, told Nikkei Asia, “We look forward to further decisive steps and solutions aimed at restricting the aggressor’s access to the global financial system,” adding that the country’s central bank and Ukrainian President Volodymyr Zelensky were also calling on Visa and Mastercard to cooperate.

Shevchenko noted that Ukraine “highly appreciates the solidarity and support that our international partners are showing today.”

Western allies have imposed a string of financial sanctions on Russia, targeting the country’s financial, energy and transports sectors as well as its export controls and visa policy.

Additionally, the United States and the European Union have announced restrictions on the Russian central bank that block access to more than $600 billion in reserves.

The sanctions sent the Russian ruble plunging to record-lows on Monday, dropping more than 30 percent against the U.S. dollar.