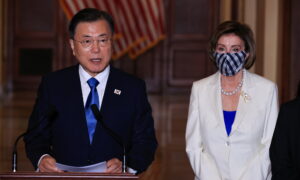 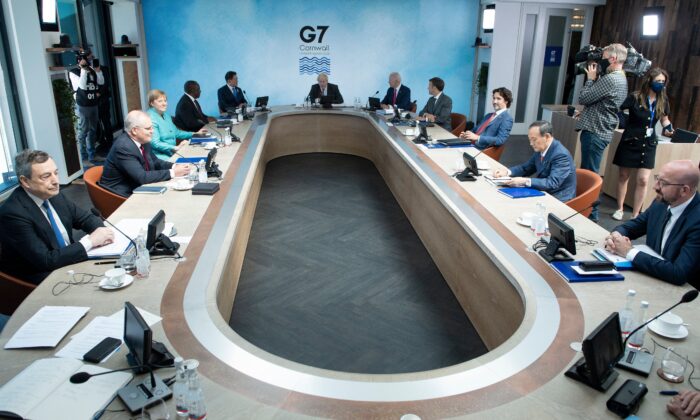 A general view of G7 leaders and their guests is pictured at a working sesssion during the G7 summit in Carbis Bay, Cornwall, UK, on June 12, 2021. (Brendan Smialowski/POOL/AFP via Getty Images)
Australia

A thorough probe into the origins of the coronavirus is necessary to avoid a repeat in future, Prime Minister Scott Morrison says.

Morrison joined G7 leaders to discuss health issues on Saturday in the UK coastal resort of Carbis Bay, with talks focused on the recovery from the pandemic and how the world can be better prepared for an outbreak of other diseases.

He also sat down with UK Prime Minister Boris Johnson and U.S. President Joe Biden, issuing a statement saying “the strategic context in the Indo-Pacific was changing and that there was a strong rationale for deepening co-operation between the three governments.”

The Australian government’s strong support on the international stage for an independent investigation into how COVID-19 emerged has angered officials in Beijing and further damaged strained relations with communist China, where the virus was first detected in late 2019.

“The purpose of these inquiries is to understand—it’s got nothing to do with politics or frankly blame or anything else—it is about understanding it,” Morrison said.

“So we all, on a future occasion should it occur, can move quickly and can respond and avoid … the absolute carnage that we’ve seen from this pandemic to both lives and livelihoods all around the world.”

UK Chief Scientific Adviser Sir Patrick Vallance and Melinda Gates, of the Bill and Melinda Gates Foundation, presented the G7 leaders with an outline of how treatments, tests, and vaccines could be developed within a 100 days of a new disease being detected.

“I thought the 100-day plan that was set out today was brilliant.”

Earlier, he said more investigations and reforms were necessary to fight potential pandemics.

“The process we called for is not yet done … It is recommending that there be further powers for WHO officers to be able to identify these things early and to ensure that that information is reliably passed on in a timely way.”

His comments were echoed by WHO head Dr. Tedros Adhanom Ghebreyesus who told a G7 media briefing after the session, “This is very tragic and I think the respect these people (the estimated 174 million infected with COVID-19 and the 3.75 million who died) deserve is knowing what the origin of this virus is so that we can prevent it from happening again.”

Tedros said that the WHO was now “preparing for the second phase” of the COVID-19 origin study, which is something the WHO “takes really seriously.”

“We will need co-operation from the Chinese side,” he said. “We need transparency in order to find the origin of this virus.”

Tedros also said the theory the virus could have emerged as a result of a laboratory leak was raised at the talks among G7 leaders on Saturday.

G7 host Johnson and his wife Carrie formally welcomed Morrison to summit on Saturday afternoon, greeting each other with elbow and lower arm taps.

“Australians are always at home on a beach,” Morrison said as he approached his counterpart on the boardwalk at St Ives.

By Michael Mehr. The Epoch Times contributed to this report.