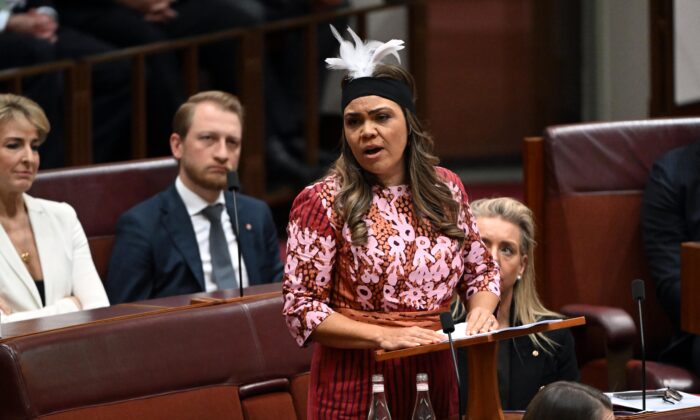 An Indigenous senator has called for an end to the “pointless virtue signaling” that she says does nothing to improve the lives of Indigenous Australians.

In her maiden speech on July 28, newly-elected Northern Territory Senator Jacinta Price of the Country Liberal Party described Labor’s vow to enshrine a Voice to Parliament as a “virtuous act of symbolic gesture,” questioning whether it will deliver practical outcomes and unite, or “drive a wedge further” between Aboriginal and non-Aboriginal Australians.

“It would be far more dignifying if we were recognised and respected as individuals in our own right who are not simply defined by our racial heritage but by the content of our character,” she said.

The former Alice Spring mayor also noted that, contrary to the popular belief that systemic racism is causing Aboriginal deaths in custody, the Royal Commission into Black Deaths in Custody found this was not the case, nor did it find Indigenous Australians more likely than other races to be incarcerated.

“We cannot support legislation that fails to acknowledge the true causes of why Indigenous Australians are marginalised or false narratives that suggest racism is the cause when it has been proven over and again that this is not the case,” she said.

“Like many countries around the world, when cultures collide and are forced to find ways through socialisation, everyone is affected.”

“Often, those that are left behind become even more marginalised and are preyed upon by many opportunists for monetary gain, power, and control. This is no different to what we are experiencing in the Northern Territory—by Labor design.”

The speech came only days before Australian Prime Minister Anthony Albanese on Saturday unveiled the wording of a draft referendum question as part of a push to enshrine an Indigenous voice in parliament. This proposal includes:

Indigenous leaders from Victoria praised the move and will write to Albanese to invite him to meet to hear lessons from the state’s ongoing treaty process that could be relevant for a referendum.

Read More
A Voice for Whom?
Opposition Wants ‘Practical’ Actions Rather Than ‘Symbolism’ to Solve Indigenous Issues

“We’ve been really clear from the beginning that we won’t be rushed and that’s really paying off now as we’ve managed to make sure the consensus is built from the ground up,” Indigenous Australians’ Assembly of Victoria co-chair Marcus Stewart said.

But the federal opposition raised questions about how the proposed Voice would work.

The Liberal Party’s new Indigenous Australians spokesman, Julian Leeser, said it was important that people understood what was being proposed by an enshrined Voice.

“You will need to see that detail from the government before you will make a decision about whether you’ll support this,” he said.