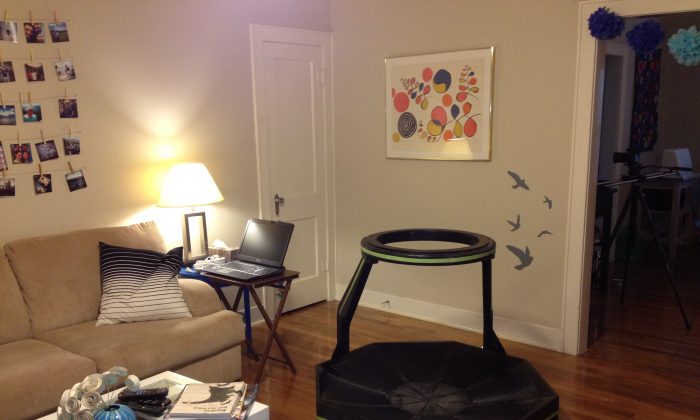 The Omni is designed to provide an immersive experience to console gaming. (Supplied by Virtuix, originally on GameGavel.com)
Tech Products & Reviews

A virtual reality system that allows you to run and jump in popular console games has been funded by fans and will enter production soon.

The Omni, by U.S. firm Virtuix, works by using sensors on shoes that track players’ movements on a dish-shaped gaming platform.
In addition, the device also uses ring-shaped motion trackers that log gamers’ movements and enable them to jump, squat and run in-game.

The device has been shown to work with popular games Call of Duty: Black Ops 2, and Skyrim.

“Gaming on a keyboard, mouse or gamepad while seated pales in comparison to the intense experience and fun that comes from actually walking, running, and jumping in games,” said Jan Goetgeluk, CEO of Virtuix in a statement.

The company launched a kickstarter on June 4, to help raise the $150,000 in funds necessary to turn the prototype into a final, commercial product.

The funds were met within three and a half hours, and as of Sunday morning, over $700,000 had been pledged by more than 1,900 backers.

The kickstarter closes on July 22, but fans will need to pledge at least $429 in order to receive an Omni. The device is designed to be used in conjunction with a virtual reality headset called Oculus Rift.

On the Virtuix website, the company says the Oculus Rift is a “step in the right direction.”

“While using the Oculus Rift players have full range of motion with their head, but the rest of their body remains motionless with a controller in their hands,” according to a blog post.

“The Omni hopes to bring the rest of your body into the virtual reality space with its 360 degree movement platform.”

Mass production on the Omni is expected to begin in December this year, with the first products shipping from January 2014.