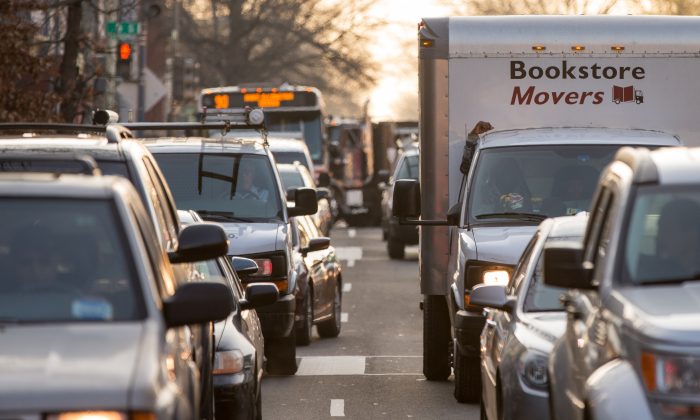 Following the California Air Resources Board (CARB) adopting rules seeking to restrict the sale of new gas cars in the state, Washington, Massachusetts, and Virginia could implement similar measures.

According to CARB’s new rules, zero-emission vehicles and plug-in hybrids should make up 35 percent of new cars sold in California beginning in 2026. This number will then rise to 68 percent in 2030 and 100 percent in 2035. California has received a waiver from the federal government that allows it to establish its own air quality standards that are more stringent than national standards.

States such as Massachusetts, Washington, and Virginia already have trigger laws in place to restrict the sale of new gas cars if California passes such a rule.

“This is a critical milestone in our climate fight. Washington set in law a goal for all new car sales to be zero emissions by 2030, and we’re ready to adopt California’s regs by end of this year,” Washington Gov. Jay Inslee wrote in an Aug. 24 Twitter post.

On Aug. 11, Massachusetts Gov. Charlie Baker signed into law a clean energy and offshore wind measure containing a provision that if California banned the sale of new fossil fuel cars, his state would follow suit.

In a statement to Fox, a spokesperson for Virginia Attorney General Jason Miyares’s office said former state Gov. Ralph Northam and the “far-left controlled General Assembly” had signed a law in 2021 that binds Virginia to California’s vehicle emission regulations.

“The Attorney General is hopeful that the General Assembly repeals this law and discontinues any trend that makes Virginia more like California. Unelected California bureaucrats should not be dictating the will of Virginians,” the spokesperson said.

In an Aug. 25 statement from the Alliance for Automotive Innovation, CEO John Bozzella pointed out that the push for supplanting fossil fuel vehicles with electric vehicles first requires fulfilling other basic requirements that will determine the success of such a plan.

“The questions policymakers should be asking: Are critical mineral and battery supply chains in place? Will the critical mineral mining and processing happen in the U.S.? Can customers afford the vehicles? Do all communities have the same access to level 2 home charging as single-family homeowners?” he said.

External factors such as inflation, supply chains, labor, ongoing semiconductor shortage, charging infrastructure, and so on are “complex, intertwined, and global issues” that are beyond the control of CARB or the U.S. auto industry, according to Bozzella.

Electrification could destroy decades of energy diversification and tie up consumers to a monolithic electric grid that is ill-equipped for extreme weather conditions, such as polar vortex cold snaps or heat waves.

“The likelihood of outages will increase with the considerable increase in demand associated with electric cars, removing natural gas from buildings, and other electrification moves,” Tanton said.

Some EVs also reportedly face heating issues during cold weather. A Tesla car owner from the Canadian province of Saskatoon changed his mind about buying the Tesla Cybertruck after the heating system in his Model Y stopped working while driving after the Christmas holidays last year. Such drivers believe that internal combustion engine vehicles are safer in their cold climates.