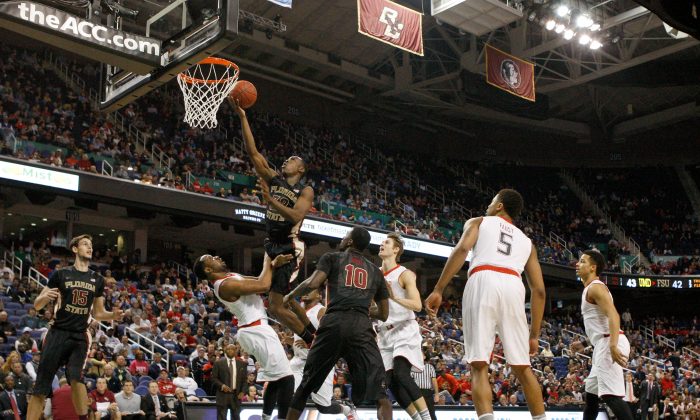 Montay Brandon #32 of the Florida State Seminoles drives to the basket against Dez Wells #32 of the Maryland Terrapins during the second round of the 2014 Men's ACC Basketball Tournament at Greensboro Coliseum on March 13, 2014 in Greensboro, North Carolina. (Streeter Lecka/Getty Images)
College Sports

The Florida State Seminoles will take on the Virginia Cavaliers in the ACC quarterfinals on Friday, March 14.

The game is set for a 12 p.m. ET tip-off at the Greensboro Coliseum in North Carolina.

The game will be broadcast on ESPN2 and the ACC Network.

A live stream is available on THEACC.com.

Virginia automatically made it into the quarterfinals; Florida State narrowly beat Maryland 69-67, pretty much ending any chance the Terrapins had of making it into the NCAA tournament.

The winner of this game will on March 15 face the winner of Pittsburgh and North Carolina, which are playing at 2 p.m. on Friday.