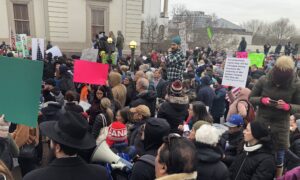 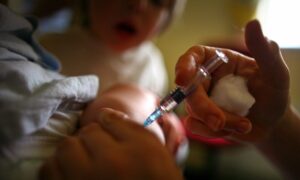 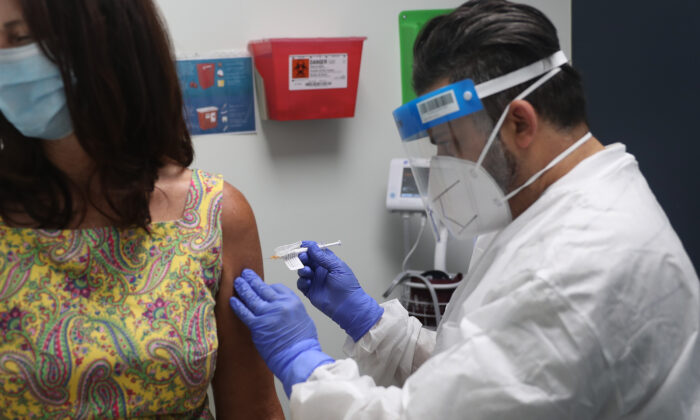 RN Jose Muniz gives a CCP virus vaccination to a volunteer at Research Centers of America in Hollywood, Fla., on Aug. 7, 2020. (Joe Raedle/Getty Images)
US News

Virginia’s health commissioner said he intends to require people to be immunized for the CCP (Chinese Communist Party) virus once a vaccine becomes available to the public, crystallizing fears that Americans will be forced to be vaccinated.

The virus “is killing people now. We don’t have a treatment for it, and if we develop a vaccine that can prevent it from spreading in the community, we will save hundreds and hundreds of lives,” Dr. Norman Oliver told Richmond news station 8News last week.

He added that such a mandate wouldn’t happen until a vaccine is “proven to be safe.”

Virginia law currently allows the commissioner to require immediate vaccination in the case of an epidemic. Exceptions are granted only if a physician has certified in writing that the administration of a vaccine would be detrimental to a patient.

But three Republican lawmakers introduced a bill (pdf) last week that would add another exception. If the legislation passes, people who object to getting vaccinated on religious grounds could avoid the requirement.

Delegate Mark Cole—the bill’s main patron—told The Epoch Times in an email: “Government does not have the right to force someone to violate their religious rights.”

“No one should be forced to take a vaccine. Every vaccine has some health ricks associated with it, they may be relatively minor but they are there. Vaccines that have been tested and found to be effective and safe should be offered to the public, and I am confident that the vast majority of people will take advantage of it, including myself. That in itself will be enough to develop a ‘herd immunity’. There is no reason to force people to take the vaccine against their will,” he added.

Cole also expressed concern about how fast COVID-19 vaccines are being developed, wondering if the speed means crucial safety steps are being bypassed.

“Who knows what the health consequences of short-circuiting the process may be?” he said.

Delegate Mark Sickles, a Democrat who chairs the state House Health, Welfare, and Institutions Committee, where the bill was referred to for consideration, didn’t return a request for comment.

Democrats control both the House and the Senate in Virginia.

The virus causes COVID-19, a disease that is proving debilitating or fatal primarily for the elderly and infirm.

Vaccines for the new illness are being rushed to development, with some targeted to be ready by the end of the year. It normally takes years of development for a vaccine to hit the market.

More than 40 percent of those with little or no interest said they were worried about how fast the vaccines are being developed and fear the vaccine is riskier than the disease itself.

In a poll from Marist University and PBS this month, 35 percent of respondents said they wouldn’t get the vaccination. Another 5 percent were unsure.

Some fear the vaccine becoming mandatory, with a number of people reacting strongly to Oliver’s remarks on social media.

“This is absolutely terrifying and should be met with whatever resistance is necessary,” Ben Jammin, a supporter of President Donald Trump who works for DFS Army, wrote on Twitter.

Kathleen Medaries, spokeswoman for Virginia Freedom Keepers, which advocates for medical freedom, said it should be up to individuals to decide whether the vaccine is right for their family.

“This is not a Republican or Democrat issue. It’s not a pro-vaccine or anti-vaccine issue, ” Medaries told 8News. “For me, it’s an issue of being able to assess each vaccine for myself and my family one at a time.”

Experts told news agencies that people who refuse to get the vaccine could be punished.

“States can compel vaccinations in more or less intrusive ways,” Dov Fox, a law professor and the director of the Center for Health Law Policy and Bioethics at the University of San Diego, told KGTV. “They can limit access to schools or services or jobs if people don’t get vaccinated. They could force them to pay a fine or even lock them up in jail.”

“Courts have found that when medical necessity requires it, the public health outweighs the individual rights and liberties at stake,” he added, citing the U.S. Supreme Court ruling in Jacobson v. Massachusetts.

Debbie Kaminer, a law professor at Baruch College in New York, cited the same ruling in a column, arguing that “states would likely have the legal right to enforce” mandates for vaccines. Even though the ruling was made in 1905, courts still rely on it, she added.

For example, New York City in 2019 required that anyone over 6 months old who lived, worked, or attended school in certain areas must be vaccinated against the measles, or face a fine.

Kaminer said employers are able to require vaccination in different ways, though few have decided to do so prior to the pandemic.

Not all states are poised to mandate a COVID-19 vaccination.

Illinois Gov. J.B. Pritzker, a Democrat, told reporters on Aug. 5 that he wouldn’t mandate that children get vaccinated upon return to school once a vaccine becomes available.

Action on a federal level may not be legal, according to Y. Tony Yang, executive director of the Center for Health Policy and Media Engagement at the George Washington University School of Nursing, and Dorit Rubinstein Reiss, a professor at the University of California Hastings College of the Law.

“A federal vaccine mandate would likely be found unconstitutional under the Commerce Clause because it would regulate activity that is not solely economic,” they wrote in an op-ed, adding: “Beyond legality, a federal vaccine mandate does not solve root problems that prevent people from vaccinating. A mandate is also likely to fuel the anti-vaccination movement and even greater distrust in government.”