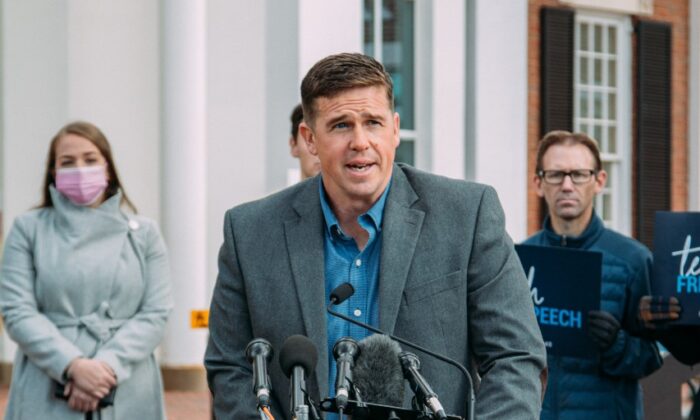 Tanner Cross, a physical education teacher at Leesburg Elementary School, speaks outside the Loudoun County Circuit Court on Nov. 15, 2021, after reaching a settlement with the Loudoun County School Board allowing for his permanent reinstatement. (Courtesy of Alliance Defending Freedom)
Education & Family

Virginia Teacher Who Spoke Out Against Transgender Policy Settles With School Board, Continues to Seek Halt to Policy

LEESBURG, Va.—A Virginian teacher who was suspended after speaking out against a pro-transgender policy at a school board meeting, has been formally allowed to return to his position, after reaching a settlement with the Loudoun County School Board on this issue.

In May, Cross spoke out at a board meeting to denounce a pro-transgender policy, saying that he wouldn’t use a child’s preferred pronoun because that would involve “lying to a child,” and “sinning against our God.” Two days later, he was suspended.

In early June, Cross sued the school board and Superintendent Scott A. Ziegler, alleging that they had violated his rights to the free exercise of religion and free speech.

Loudoun County Circuit Court Judge James E. Plowman in June ordered the board to reinstate Cross as the case was pending, a decision upheld by the Virginia Supreme Court in August.

Cross reached a settlement (pdf) with Loudoun County School Board on Nov. 10, under which the school board agreed to cover $20,000 in legal fees and remove any reference to the suspension from his personnel file.

“I can now confidently continue teaching at Leesburg elementary school without fear of punishment for expressing my views,” said Cross at the press conference outside of Loudoun Courthouse in Leesburg, Virginia, on Monday. “Now the battle turns to policy 8040 itself.”

Policy 8040 (pdf) is a measure introduced by the school board in August that requires Loudoun County Public Schools teachers and staff to address a transgender or “gender-expansive” student by the student’s preferred pronouns. Cross’s attorneys have referred to the requirement as the “pronoun mandate.”

Cross, joined by two other local teachers Monica Gill and Kimberly Wright, is asking the court to issue an injunction to stop the enforcement of Policy 8040. During Monday’s hearing, Judge Plowman said he would probably decide the case before Christmas.

“I cannot lie to a child. But that’s exactly what policy requires me to do. So today, we asked the court to halt this policy because it forces me to say things that are both untrue and harmful to my students,” Cross said at the press conference.

Arguments in court on Monday centered around whether pronoun mandate’s infringed upon the free exercise of religion clause under the First Amendment, and whether the policy was a “public concern” which would trigger protections under the free speech clause. If, however, the policy is determined to be an instance of “curricula speech,” which is school-sponsored, supervised by faculty, and designed to impart knowledge or skills, then it falls outside the scope of the Constitution’s free speech protections.

Stacey Haney, a defense attorney representing the school board and superintendent, said during the hearing that the policy would require teachers to say only the pronouns without affirming belief. But plaintiff attorney Ryan Bangert contends that such a scenario wouldn’t work in practice.

“Anytime you take away someone’s ability to live their life honestly, truly, to speak the truth as they believe it, then you’re stripping them not just a right but one of the most fundamental rights that our Constitution can guarantee. It’s absolutely essential to human conscience and dignity,” Bangert told The Epoch Time after the hearing.

Haney, the defense attorney, also said the implementation of Policy 8040 in the classroom would be specific to the transgender student and the student’s family, and therefore would not constitute a public concern. Judge Plowman then asked whether this was the case considering that the policy impacted other students in the same class and their parents. Haney replied that while parents could comment on the policy at school board meetings, this does not make the issue a public concern.

Plowman also asked how far the policy would extend: Would it be a policy violation if a teacher came across a transgender student at a grocery store and didn’t address the student by their preferred pronoun? After a few seconds of silence, Haney responded that the teacher’s words spoken outside the classroom wouldn’t be curricula speech, without specifying whether this would be a policy violation or not.

Haney also affirmed that Loudoun County Public Schools would go with the student’s pronoun choice even if it’s not included in the list provided by the policy.

According to Tyson Langhofer, another plaintiff attorney, this means that the policy should not be considered curricula speech.

In response to Epoch Times’ inquiry on the settlement and the court hearing, Loudoun County Public Schools Public Information Officer Wayde Byard said that it would not comment on pending litigation.