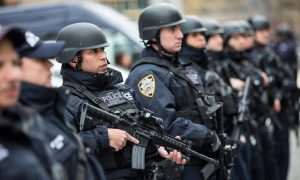 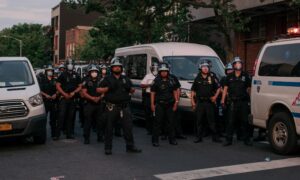 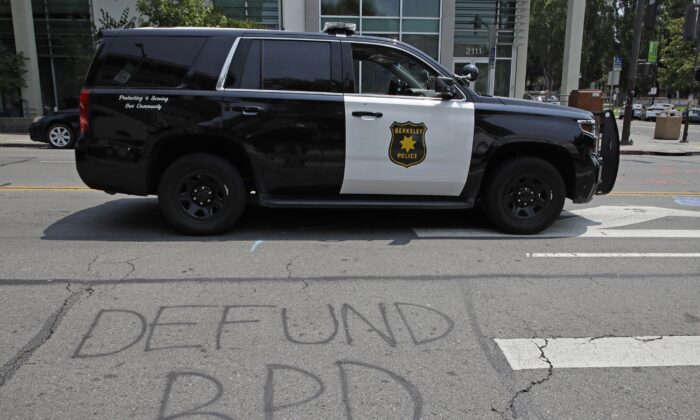 A Berkeley police vehicle waits at a stop light near graffiti calling for the defunding of the Berkeley police department in Berkeley, Calif., on July 15, 2020. (Ben Margot/AP Photo)
Policy

Virginia State Senate on Thursday passed police reform legislation that could ban no-knock warrants and chokeholds, and require a higher level of training for police.

Democrats led the passing of Senate Bill 5030 which encompasses several “use of force” police reform issues highlighted by the death of George Floyd and subsequent nationwide protests.

Senate Democratic Caucus Chair Mamie E. Locke’s (D-Va.) sponsored the bill which bans no-knock warrants, used in the case of Kentucky’s Breonna Taylor. Under the legislation, all warrants would also have to be issued for daylight hours unless otherwise approved by a judge for early morning or nighttime.

In the case of Breonna Taylor, the police used a no-knock warrant and entered her apartment shortly after midnight.

In addition, the bill prohibits the use of deadly force unless the officer’s life is threatened, and it requires Virginia’s Department of Criminal Justice Services to institute minimum standard training for the entire force, including deescalation techniques.

Officers would be required to warn a suspect before firing any shots and be restricted from shooting at moving vehicles.

The bill would allow the state to defund police departments if that jurisdiction shows evidence of a pattern of biased policing. It would also make it easier to de-certify a police officer for any serious misconduct.

Another provision in the bill would require that officers intervene if another officer is using excessive force or unlawful use of force, as alleged in the case of George Floyd. It also requires police chiefs and sheriffs to notify the Criminal Justice Services Board within 48 hours of any serious misconduct by an officer.

In Floyd’s case, there were three Minneapolis police officers who did not intervene when the fourth had his knee on Floyd’s neck for over 8 minutes.

Democrats praised the legislation as a victory for public safety and racial justice, but Republicans questioned how police officers would be able to do their job effectively, especially in life-threatening situations.

“We’ve slowed things down long enough and it’s time that we begin to effectuate some fairness here and some justice here,” said Locke, the bill’s chief sponsor.

Sen. Amanda Chase (R-Va.) said of the bill, “How dare us to sit here and question when we’re just Monday morning quarterbacks?”

The police reform bill will now be voted on in the Virginia House of Representatives, where there is also a Democrat majority.