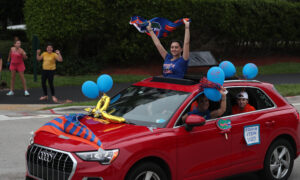 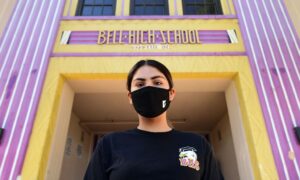 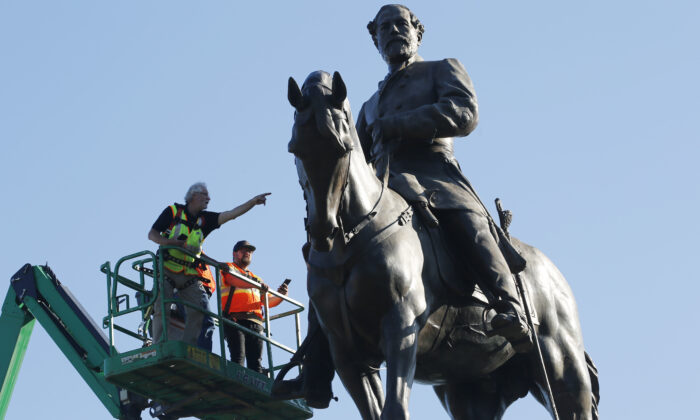 An inspection crew from the Virginia Department of General Services inspect the statue of Confederate Gen. Robert E. Lee on Monument Avenue in Richmond, Va., on June 8, 2020. (Steve Helber/AP Photo)
US News

A school board voted unanimously on Tuesday to change the name of Robert E. Lee High School in Springfield, Virginia.

The Fairfax County School Board said in a statement that they will take suggestions from the community, before voting again in July to decide a new name for the high school that has been named after the Confederate Army commander. The new name will go into effect for the upcoming 2020–21 school year.

“Confederate values are ones that do not align with our community,” said Board Vice Chair Tamara Derenak Kaufax, who initiated the name change. “I have seen the pain and hurt that these names have inflicted on friends, colleagues, and community members. Our schools need to be places where all students, staff, and members of the community feel safe and supported.”

Meanwhile, in the neighboring Prince Williams County, community meetings have been held this week to select new names for Stonewall Jackson High School and Stonewall Middle School, both located in Manassas and named for Thomas Jonathan Jackson, the Confederate general who earned the nickname “Stonewall” during the First Battle of Manassas in 1861.

The decision comes as Virginia’s Gov. Ralph Northam (D) ordered that an iconic Robert E. Lee monument in the city of Richmond would be removed and placed in storage as soon as possible. The statue has been heavily defaced with graffiti by protesters in the past few weeks, amid the nationwide unrest sparked by the death of George Floyd. Protesters have vandalized the statue of Confederate commander Williams Carter Wickham on the Virginia Commonwealth University campus in Richmond, before pulling it down with ropes.

Earlier this month, Jefferson and Washington elementary schools in Berkeley, California dropped their names after the school board approved a “Resolution in Support of Black Lives Matter,” an initiative to address “systemic racism” in the school system. The original school names commemorate the first and third presidents of the United States, George Washington, and Thomas Jefferson.

“Jefferson, author of the Declaration of Independence and a Framer of the Constitution, was nonetheless an unrepentant slaveholder whose wealth was built on the labor of the enslaved,” the school district’s resolution said. “Washington, to whose selfless service to a new nation this country is forever indebted, nonetheless profited from the enslaved labor of hundreds of human beings, and signed the 1793 Fugitive Slave Act.”