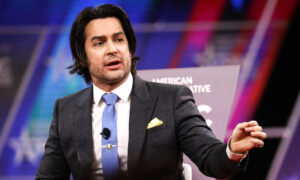 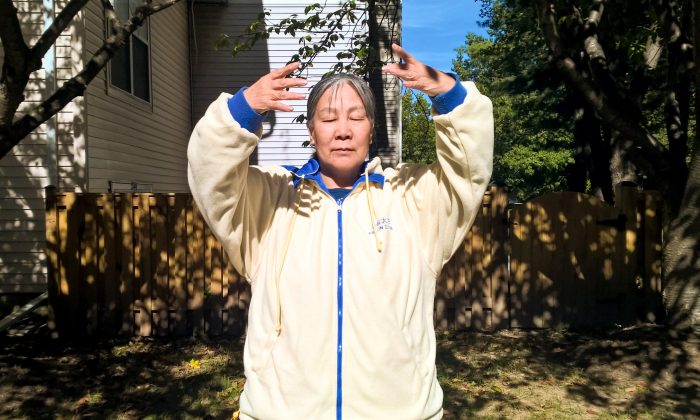 Angela Wang does a Falun Gong meditative exercise in her backyard in Fairfax, Va. on Oct. 22, 2018. (Courtesy Angela Wang)
US News

WASHINGTON—Many in the United States may have recently heard about the “influence operations” and spying by the Chinese communist regime in America and other countries. Angela Wang, a 69-year-old resident of Virginia, has not only heard about these, but also experienced them firsthand.

Several years later, she officially retired from her workplace, No. 78 Middle School in Hebei District, Tianjin City, where she had worked for 20 years as an English teacher. Since retiring, she had been receiving her pension—until about two years ago, that is.

At the end of 2016, Wang was suddenly told that her pension was suspended due to her involvement in “anti-(Communist) Party” and “anti-China” activities in the United States.

A local police officer in Tianjin City, whose surname was Dong, told Wang several times that if she stopped practicing Falun Gong, “This issue could be easily resolved.”

Falun Gong is an ancient Chinese discipline for mental, physical, and spiritual improvement based on the principles of truthfulness, compassion, and tolerance. It was first introduced to the public in China in 1992.

Since then, it has spread all around the world. The official website FalunDafa.org lists local contacts in 82 countries. The practice’s main book, “Zhuan Falun,” has been translated into 41 languages.

After supporting the practice for seven years due to its benefits for public health, the communist regime in China began an overwhelming suppression of Falun Gong in 1999, citing the practice’s popularity.

According to the Falun Dafa Information Center, millions of practitioners have been detained in jails, labor camps, and brainwashing centers; 4,258 deaths due to torture and abuse can be confirmed, although the actual number is believed to be much higher, due to the difficulty of getting information out of China.

Wang said that she began practicing Falun Gong in 2004, six years after she left China, after having battled severe health problems, including stomach cancer, for many years. She doesn’t know how the authorities in China became aware of the fact that she practiced Falun Gong in the United States.

“During 2006 to 2011, I had been going to the Falun Gong practice site in front of the National Air and Space Museum in Washington to demonstrate Falun Gong exercises and to clarify the truth about Falun Gong to Chinese tourists who were deceived by the Chinese Communist Party’s lies about Falun Gong,” Wang said.

“When I first went there, fellow Falun Gong practitioners told me that people hired by the Chinese Embassy would usually come to take photos of us and collect our information. But I didn’t pay much attention. I thought to myself, ‘Why should I care, as I am a U.S. citizen already?’”

Wang says the communist regime in China not only suspended her pension, but also has harassed and threatened her relatives in China.

“My only remaining direct relatives in China now are my brother, sister, nephews, and nieces. The communist officials have given pressure to them all. My brother and sister were actually forced to call me and record the telephone conversation to show to the authorities that they carried out their ‘task’ of trying to convince me to stop being involved in Falun Gong activities,” Wang said.

In February, Chinese officials from the workplace level, city level, and district level all went to Wang’s sister’s home to again pressure her about Wang’s beliefs.

“This is very annoying. I don’t know how many communist spies there are in the United States. I only know that the CCP is very evil and is capable of anything,” she said.

“I am very much worried for my family’s safety in China. I hope the U. S. government can do something to stop this evil.”