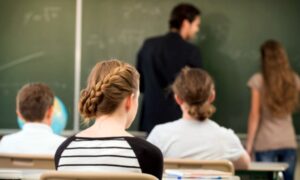 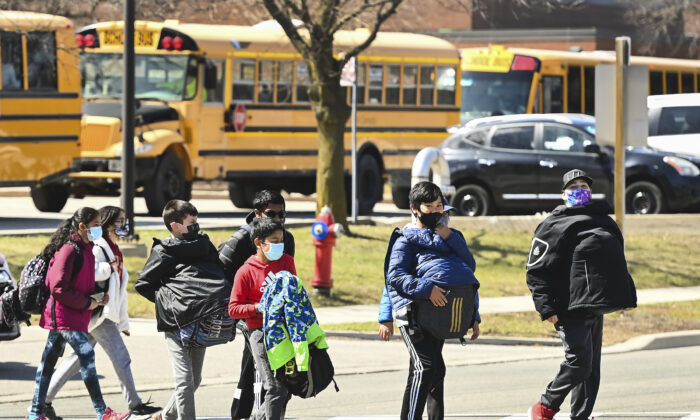 Students cross the street during the COVID-19 in a file photo. (The Canadian Press/Nathan Denette)
Education

Parents in Virginia submitted thousands of signatures this week to recall a Fairfax County school board member after she opposed returning to in-person classes during the COVID-19 pandemic.

The board member, Elaine Tholen, is accused of being derelict in her duty for keeping schools closed for 12 months, according to the petition organizers, Open FCPS Coalition. Organizers said that virtual learning used during lockdowns goes against scientific advice and against parents’ desires.

According to the group’s website in a recent update, it has “collected all signatures for Tholen.” Specifically, the group told The Associated Press and other media that it submitted more than 5,000 signatures, which is far more than the 3,600 signatures required to recall her.

Tholen can ask a judge to throw out the petition seeking her recall. The Fairfax County Circuit Court received the signatures, and a judge can decide to dismiss the recall effort or take it to trial where she could be removed and a special election would then be held.

Tholen told The Associated Press that she has “always put students first” and suggested her decisions were prudent because she’s “been in education for a very long time.”

“I look forward to continuing to earn my constituents’ trust and support as we prepare to welcome all students in person five days per week,” Tholen said in a statement to other news outlets. “As a former classroom educator and now a school board member, I have always worked for my students’ well-being and to help them reach their utmost potential. I will continue to put our students’ best interests first.”

“The decision to provide learning through a virtual format last year was a direct result of the circumstances and the health and medical advice available at the time,” the school system said in a statement to media outlets this week. “The School Board and FCPS leadership was responsible for ensuring the health and wellbeing of its 189,000 students during the unprecedented circumstances of a pandemic. FCPS moved to reopen its schools as quickly as circumstances allowed and did so ahead of many other school districts in the area. The decision to conduct classes online was a difficult decision, but it was the right one.”

Petition organizers, however, said that students in Fairfax County have suffered amid the school closures.

“Just how far behind are our students? How will these deficits be met?” Zia Tompkins, a coalition board member, told the local Tysons Reporter. “Parents have been left in the dark about these issues.”

Parents, she added, have “real doubts as to whether the Fairfax County school system is even serious about opening full-time in-person for the fall.”

According to the Open FCPS Coalition’s website, organizers have obtained nearly all the signatures required to start the recall of another board member, Laura Jane Cohen.

The Epoch Times has contacted Tholen for additional comment.