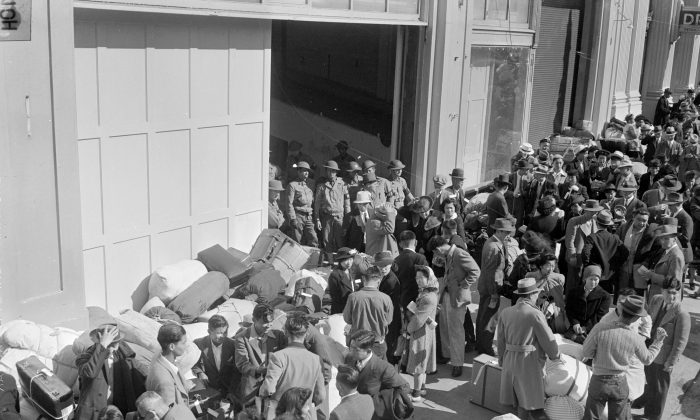 As military police stand guard, people of Japanese descent wait at a transport center in San Francisco April 6, 1942 for relocation to an internment center at Santa Anita racetrack near Los Angeles. They were among thousands of people forced from their homes in the name of national security following the attack on Pearl Harbor. (AP Photo)
Middle East

The mayor of Roanoke asked agencies to suspend relocating Syrian refugees to the area in the wake of the Paris terrorist attacks and other threats.

Mayor David Bowers said in a statement Wednesday that relocation efforts by governmental and non-governmental agencies should be stopped “until these serious hostilities and atrocities end” or are brought under control.

President Barack Obama wants to bring 10,000 more Syrian refugees to the United States during the current budget year. The federal government controls immigration, leaving states and cities with no say in stopping it.

In his statement, Bowers cited Friday’s attacks in Paris that killed 129 people and wounded more than 350, and the Oct. 31 bombing of a Russian airliner over Egypt’s Sinai Peninsula, killing all 224 on board. Islamic State militants have claimed responsibility for both.

Bowers reassured residents that law enforcement and public safety agencies in Roanoke are prepared to protect them “from harm and danger from this present scourge upon the earth.

“In this regard, at least for a while into the future, it seems to me to be better safe than sorry.”

Bowers also mentioned the U.S. government’s internment of Japanese-Americans in camps during World War II after the bombing of Pearl Harbor. Bowers said it appears that the threat of harm to the United States from the Islamic State “now is just as real and serious as that from our enemies then.”

More than four decades after World War II, the U.S. government issued a formal apology and paid reparations to former Japanese internees and their heirs.

Bowers, a Democrat who announced last week that he will not seek a fifth term as mayor next year, didn’t immediately return a telephone message Wednesday.

Several Republican state lawmakers said they are working on legislation that would prohibit state agencies from assisting Syrians to resettle in Virginia for the next two years. They also called on Democratic Gov. Terry McAuliffe to refuse the resettlement of Syrian refugees for that same period.

Republican lawmakers said a two-year freeze on resettlements is necessary to ensure that no Syrian terrorists are relocated to Virginia.

McAuliffe has rejected those requests.

McAuliffe spokesman Brian Coy said Virginia has only a “consultative role” with the federal government “but the decision to send refugees to Virginia or any other state is not one over which states have any control.”

Coy said the state’s role is to offer advice on where refugees be resettled in the state, and to offer services to the refugees once they’ve arrived. Those services are entirely funded by the federal government, Coy said.

There were 25 Syrians resettled in Virginia in the last fiscal year, Coy said, and none during the current fiscal year.