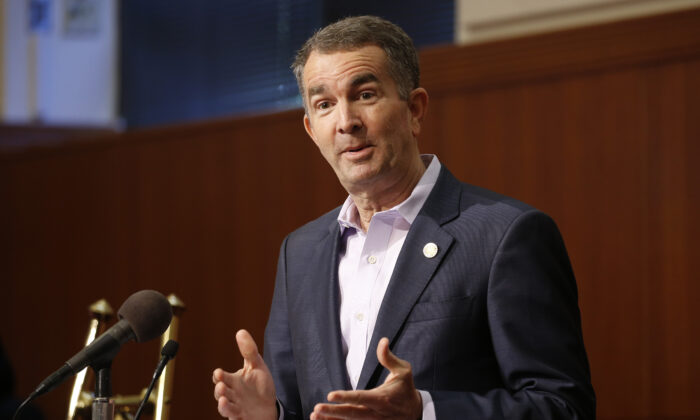 Virginia Gov. Ralph Northam gestures during a news conference at the Capitol in Richmond on April 8, 2020. (Steve Helber/AP Photo)
AMERICA

Virginia Makes Mask Use Mandatory After Increase in COVID-19 Cases

Virginia Gov. Ralph Northam announced a statewide mask requirement after the state recorded one of its highest single-day increases in COVID-19, and the requirement will go into effect on Friday.

“To protect each other, we all need to wear a face-covering in indoor public settings, starting this Friday, May 29. This includes retail stores, barbershops, restaurants, government buildings, on public transportation, or anywhere where people can congregate in groups indoors,” he wrote on Twitter.

Masks will not be required while drinking, eating, or exercising, he told reporters at a news conference. He noted that some individuals who have health issues while wearing masks and children under the age of 10 can be exempt.

Health officials “strongly” recommend that children “3 years old or older wear a face covering to the extent possible,” he said.

“I am taking this step because science increasingly shows us that the virus spreads less easily when everyone is wearing face coverings,” Northam added during the news conference. “This is about protecting those around us—especially our workers.”

He added that “we should treat each other the way that we want people to treat us.”

All of Virginia will operate under Phase One starting Friday, including Northern Virginia, Richmond, and Accomack County. As we move forward thoughtfully and deliberately, we all must stay vigilant—following the guidelines, wearing masks inside, and looking out for each other. pic.twitter.com/mdOOlyoXyN

The U.S. Centers for Disease Control and Prevention recommended that Americans wear a mask to prevent the spread of the CCP (Chinese Communist Party) virus, a novel coronavirus that first emerged in China. Some regions have gone a step further and impose fines or legal penalties for not wearing a face covering.

Northam, however, said that Virginia will not impose such penalties.

“This is a matter of public health, and as a result any enforcement that is needed will be done by our health officials,” he said. “This is not a criminal matter. Our law enforcement, our police, and our sheriffs will not have a role in enforcing this.”

The Virginia Department of Health has the power to enforce the violations through a court order, an agency official told NBC12.

“We hope and expect Virginians will work together to comply with these important guidelines—and we have an enforcement mechanism in place should egregious violations occur,” said the official in a statement to the news outlet.

The rule was announced just before State Health Commissioner M. Norman Oliver reported more than 1,600 cases of the CCP virus throughout Virginia.

The facial coverings rule was announced minutes before State Health Commissioner M. Norman Oliver said 1,615 new cases had been reported throughout the state, bringing Virginia’s total number of coronavirus cases to 39,342. Oliver also reported an additional 28 deaths from COVID-19, the disease caused by the virus, bringing the state’s death toll up to 1,236.