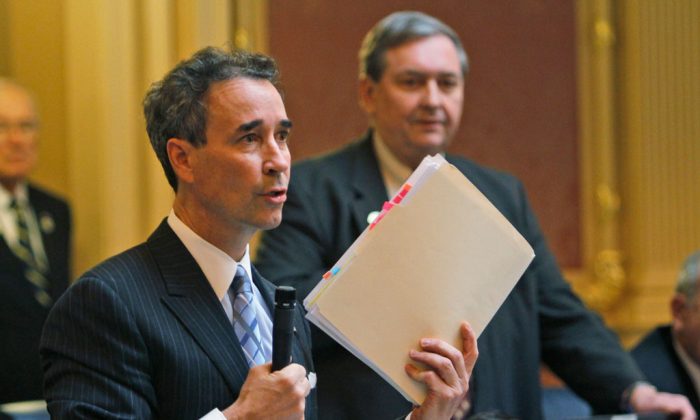 Del. Joe Morrissey (D-Henrico) holds papers during a debate on a bill that would end the state mandate for girls to receive the HPV vaccine during House session at the Capitol in Richmond, Va., on Jan. 26, 2012. Jailed Virginia lawmaker Morrissey was able to win a special election because enough voters apparently weren't bothered by his sex-scandal conviction. But whether he'll find enough support among his colleagues to remain in the House of Delegates is another matter. Morrissey, who defeated two opponents Tuesday night, Jan. 13, 2015, will return to a legislative body whose leaders have been researching the process for expelling him. (AP Photo/Steve Helber)
Politics

RICHMOND, Va.—A newly re-elected Virginia lawmaker hitched a ride from the jailhouse to the statehouse to be sworn in, even as legislative leaders discussed how to throw him out.

Del. Joseph D. Morrissey, who spends his nights in jail because of a sex scandal conviction, was back in his familiar legislative arena Wednesday but with a whole new set of circumstances: Colleagues ignored him, he had to give up his old office and his desk on the House floor was put in a far corner.

Morrissey didn’t appear bothered by his pariah status and instead brimmed with defiant confidence. He told reporters he wasn’t worried that both parties have repeatedly denounced him and said he doesn’t belong in the oldest continuously operating legislative body in the Western Hemisphere.

Morrissey said he didn’t find out he had won re-election until after he had returned to jail Tuesday night. Morrissey was convicted last month of contributing to the delinquency of a minor. Prosecutors accused him of having sex with a 17-year-old girl who worked for him. Morrissey and the teenager, now 18 and pregnant, have denied it.

Prosecutors said nude photos of the 17-year-old were found on Morrissey’s cellphone and allegedly shared with a friend. Morrissey, a bachelor who has fathered three children out of wedlock with three different women, has denied wrongdoing but entered the misdemeanor plea to avoid felony charges punishable by years in prison and automatic loss of his legislative position.

An attorney, Morrissey has a history of fistfights, contempt of court citations and disbarment. He announced he was resigning his seat in December after his conviction, but promptly began running for his old seat as an independent after he said Democrats blocked him from the party nominating process.

Inside his new office, filled with boxes, he put his right hand in the air and pledged to uphold the constitutions of the United States and Virginia. Underneath his suit, he wore an ankle bracelet so law enforcement officials can keep tabs on him.

Officials in both parties have denounced Morrissey’s criminal history, but as of Wednesday appeared to have not decided what they should do with him, including possibly expelling him.

Morrissey told reporters that voters “spoke very clearly” and would likely support him again should he be kicked out.

“If you look at history, people that have been in my situation, if they run again, their margin increases more,” said Morrissey, who compared himself to civil rights icons.

Wednesday marked the first day of the 2015 legislative session, and Morrissey was late to arrive because his car wouldn’t start at the parking lot of the Henrico County jail. Morrissey said he had to get a ride to the Capitol with a Washington Post reporter waiting to interview him. He declined to say how he planned to get back to prison.

It would take a two-thirds vote of the 100-member House to expel a member — something that hasn’t happened since 1876, according to House Clerk G. Paul Nardo.

Morrissey could also be censured by his colleagues and blocked from having any committee duties.

Morrissey spent much of Wednesday afternoon huddled in his new office. At one point he came out to introduce himself to his new receptionist.

“I’m sorry about the drama,” Morrissey told her.