Virginia Hospital Provides Update After Court Holds It in Contempt 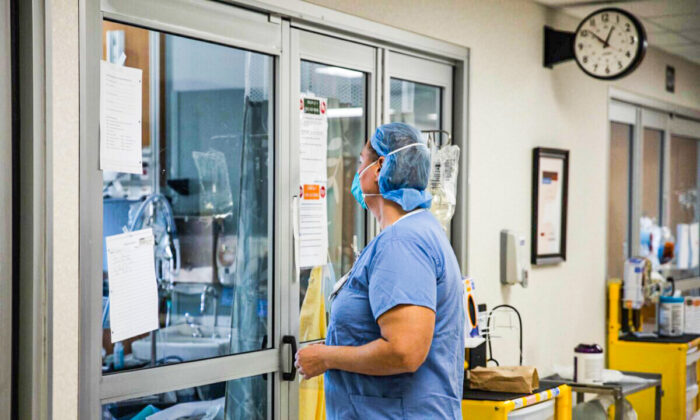 A health care professional prepares to enter a COVID-19 patient's room in a file photo. (Megan Jelinger/AFP via Getty Images)
By Jack Phillips

Update as of 3 p.m. ET Wednesday: A spokesperson for Virginia’s Fauquier Hospital told The Epoch Times on Wednesday that it “would like to correct the misinformation regarding the family who disagreed with the clinical course of treatment recommended by our physicians for their family member.”

“As outlined in the court documents, a patient’s family filed a petition seeking to compel our hospital to administer medication prescribed by an outside physician. This physician had no privileges to practice medicine at our hospital,” according to the spokesperson.

They continued to say that it “is unable to administer medications to our patients without a valid order from a physician on our medical staff” and that “doing so would violate standard hospital practice and Virginia law.”

“That said, our team has worked around the clock to cooperate with the patient’s family and the Court to identify potential viable solutions, including to make a reasonable attempt to transfer the patient’s care to their preferred physician, which has since happened,” the spokesperson said, adding that “despite what has been shared online, we believe that we have navigated these complexities as swiftly as possible and have remained in compliance with standard hospital practice, including federal and state regulations, throughout this matter.”

After a judge found Virginia’s Fauquier Hospital in contempt of court in a lawsuit filed on behalf of a COVID-19 patient who was denied being prescribed Ivermectin, the hospital said Tuesday that it is complying with the court order.

Christopher Davies, the son of the patient, Kathleen Davies, told the Fauquier Times that two doses of Ivermectin—generally used to treat parasites—were given to the woman at 8:45 p.m. on Monday. The Epoch Times has contacted Fauquier Hospital for comment.

It came after Judge James. P. Fisher, of the 20th Judicial Court of Virginia, signed an order Monday finding Fauquier Hospital in contempt of court or “needlessly interposing requirements that stand in the way of the patient’s desired physician administering investigational drugs as part of the Health Care Decisions Act and the federal and state Right to Try Acts.”

Furthermore, “given the gravity at hand,” the hospital has to pay “$10,000 per day retroactive to the date of the court’s injunction order filing,” the judge ordered, meaning that each day the hospital does not prescribe Ivermectin to Davies, they will have to pay the fine “until the ordered relief has been accomplished.”

Her family had requested the hospital give Davies, who had been on a ventilator since Nov. 3, Ivermectin to treat her COVID-19 as a last resort to save her life. The Davies’ family doctor had prescribed Ivermectin to the woman, but Fauquier Hospital resisted administering the drug and cited medical, legal, and other concerns, the Fauquier Times reported.

The woman’s family took legal action on Dec. 6, filing a complaint to compel the hospital to treat her with the drug, according to the Fauquier Times.

“It’s a matter of life and death,” Christopher Davies told the paper. “She’s on her death bed. Any kind of negative repercussions [from Ivermectin] are null and void.” And because all treatment options haven’t worked, Davies argued that the family should be able to try the drug.

“I get it. The doctors at the hospital are afraid. This has become politically charged. I’m not trying to go after the hospital. I just want them to use it in hopes that it will help,” he further said, referring to the controversy regarding using Ivermectin to treat COVID-19. “They believe it’s a fight between the rights of the hospital and the rights of citizens. They feel their rights trump her rights,” Davies continued.

In a lengthy statement to the Fauquier Times, Fauquier Hospital spokeswoman Sarah Cubbage said that the facility is now complying with the judge’s order and is seeking to have his contempt order thrown out.

“Like all other hospitals, we are bound by rules and regulations that govern how we operate to ensure that we administer care safely to our patients,” Cubbage said in the statement. “From a legal and regulatory standpoint, we must always follow the appropriate steps to credential and privilege physicians to practice medicine at our facilities … this is to protect patients and ensure the consistent delivery of quality care.”

Furthermore, she argued that the hospital “cannot compel physicians to administer treatment that is against their clinical judgment and is not within the accepted medical standards of care.”

“We believe that we have navigated these complexities as swiftly as possible and have remained in compliance with standard hospital practice, including federal and state regulations, throughout this matter,” she said.

Regarding its compliance with Fisher’s order, Cubbage said that the court provided the hospital “additional guidance and clarification,” which it was then able to meet.

“We have reported this to the court and requested that the contempt order be purged,” her statement added.

The Food and Drug Administration (FDA) has approved Ivermectin to treat intestinal strongyloidiasis and onchocerciasis, as well as other parasites. The drug hasn’t been approved by the agency to treat COVID-19, although some severely ill COVID-19 patients have apparently seen positive results after taking the drug.