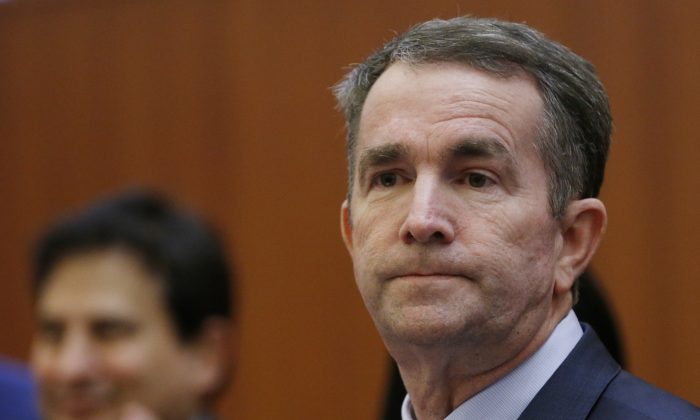 Virginia Gov. Ralph Northam prepares to address a news conference at the Capitol in Richmond, Va., on Jan. 31, 2019. (Steve Helber/AP Photo)
US News

Virginia Governor Not to Resign, Says He’s Not in Racist Yearbook Photo

Virginia’s Democratic Gov. Ralph Northam announced on Feb. 2 that he will not resign and said he’s not in the controversial photo in his 1984 yearbook.

Northam said the photo appeared on his yearbook page by mistake.

He discussed the photo with a classmate earlier in the day and was told there are “numerical mistakes” in the yearbook, he said.

Northam claimed that he saw the yearbook for the first time on the evening of Feb. 1. “We’re going to continue to gather evidence in the coming days and I think all of you will be reassured to see that I am not in that photograph,” he said.

But he said he did darken his face during a dance contest in 1984 when he was 24, the same year he graduated and the yearbook was published.

“That same year I did participate in a dance contest in San Antonio in which I darkened my face as part of a Michael Jackson costume. I look back now and regret that I did not understand the harmful legacy of an action like that,” he said.

“I spoke with Governor Northam this morning. His past actions are completely antithetical to everything the Democratic Party stands for. It’s time for Ralph Northam to step aside and let Lieutenant Governor Justin Fairfax serve Virginians as their next Governor,” Perez stated.

The Republican Party of Virginia also asked Northam to resign after his statement.

“Our call for Ralph Northam’s resignation stands. His self-serving statements did nothing to rectify his past indiscretions. His stance on life and his racist past are inexcusable. Like we said yesterday, Governor Northam has lost the moral authority to govern our Commonwealth,” they said in a Twitter statement.

The controversial picture obtained by Big League Politics comes from the 1984 yearbook of the Eastern Virginia Medical School has two people, one dressed in blackface and another in a Ku Klux Klan (KKK) garb.

The Democratic Party of Virginia called on Northam to resign after the photo emerged.

“We stand with Democrats across Virginia and the country calling him to immediately resign. He no longer has our confidence or our support. Governor Northam must end this chapter immediately, step down, and let Lt. Gov. Justin Fairfax heal Virginia’s wounds and move us forward,” Democratic Party of Virginia Chair Susan Swecker said in a statement.

Northam has refused to resign.

Nancy Pelosi (D-Calif.), speaker of the House of Representatives, joined the outrage over the photo and called on Northam to “do the right thing.”

“The photo is racist and contrary to fundamental American values. I join my colleagues in Virginia calling on Governor Northam to do the right thing so that the people of the Commonwealth of Virginia can heal and move forward,” she tweeted.

The photo is racist and contrary to fundamental American values. I join my colleagues in Virginia calling on Governor Northam to do the right thing so that the people of the Commonwealth of Virginia can heal and move forward.

“Justin Fairfax is the leader Virginia needs now,” he said.

There is no place for racism in America. Governor Northam has lost all moral authority and should resign immediately, Justin Fairfax is the leader Virginia needs now.

Northam apologized for the offensive photo in a statement and a Twitter video.

My fellow Virginians, earlier today I released a statement apologizing for behavior in my past that falls far short of the standard you set for me when you elected me to be your governor. I believe you deserve to hear directly from me. pic.twitter.com/1rSw1oxfrX

“I am deeply sorry for the decision I made to appear as I did in the photo and for the hurt that decision caused then and now,” he stated.

Northam explained on Saturday, Feb. 2, that he apologized because he recalls the scene when he darkened his face to portray Michael Jackson.

“This was a horrific photo on my page, with my name,” he said.

This is the second time in less than a week that the Democratic governor made headlines.

During an interview on Jan. 30 on WTOP-FM, Northam said that killing children after they were born could be an option under a new bill that Democrats are trying to pass in Virginia.

“And then a discussion would ensue between the physicians and the mother,” he added.

According to an article back in August 2017 in The Washington Post, Planned Parenthood—one of the largest abortion providers in the United States—donated millions of dollars to the Virginia governor’s campaign.

The Virginia affiliate of Planned Parenthood threw its support behind Ralph Northam, a Democrat, in August 2017, dropping $3 million and providing close support, deploying canvassers to knock on 300,000 doors and sending mailers to another 400,000 homes.

Planned Parenthood Advocates of Virginia confirmed the donation and support to The Washington Post.