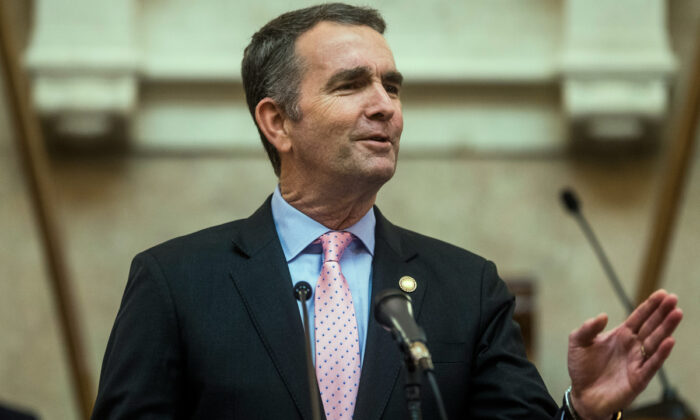 Gov. Ralph Northam delivers the State of the Commonwealth address at the Virginia State Capitol in Richmond, Va., on Jan. 8, 2020. (Zach Gibson/Getty Images)
US News

Virginia Gov. Ralph Northam has declared a state of emergency and is banning firearms and other weapons on the state capitol grounds ahead of a gun-rights demonstration next week.

“We have received credible intelligence from our law enforcement agencies that there are groups with malicious plans for the rally that is planned for Monday,” Northam told reporters during a press conference on Wednesday. “Intelligence shows the threat of armed militia groups storming our capitol,” he added.

Northam said authorities received reports of “out-of-state militia groups and hate groups planning to travel from across the country to disrupt our democratic process with acts of violence” and added that they may be “are coming to intimidate and to cause harm,” it was reported.

His declaration, according to a statement on the governor’s website, prohibits weapons on the grounds of the capitol for three days.

The declaration will provide joint law enforcement and public safety agencies with more resources ahead of the rally, his office said. The declaration is also temporary and extends from this Friday, Jan. 17, to Tuesday, Jan. 21.

After the emergency expires, most firearms will be allowed on the capitol grounds as Virginia is an open-carry state—unless another emergency declaration is made.

“No one wants another incident like the one we saw at Charlottesville in 2017. We will not allow that mayhem and violence to happen here,” he said, reported USA Today, referring to a rally where clashes broke out and a protester was killed.

But Virginia Citizens Defense League organizer Philip Van Cleave, the organizer of the Richmond rally, said the event will still take place. He said it’s not clear how his group or others will respond to the emergency declaration.

“Hell no, he’s not going to stop it with that little act,” Van Cleave told the newspaper, adding that legal action could be pursued. “The governor and leadership in the Democratic Party have declared war on law-abiding gun owners, and they’re tired of it,” Van Cleave said. “It’s basically people saying we’re fed up. We’ve had enough.”

He added that Northam “has touched the third rail” and “has motivated people to drive across the state and from other states to come protect our rights.”

Northam, in news reports, has tried to dispute the idea that police in Virginia will go door-to-door to confiscate guns.

“We have no intention of calling out the National Guard. We’re not going to cut off people’s electricity. We’re not going to go door-to-door and confiscate individual’s weapons,” Northam said on Jan. 7. “We are going to pass common-sense legislation that will keep guns out of dangerous hands and keep Virginia safer. It is just that simple.”