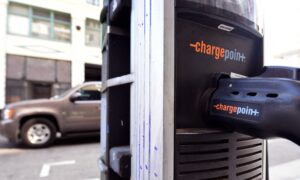 It’s still unclear if a tornado touched down in Virginia Beach, Virginia, on Thursday afternoon.

However, at least 10 people were injured in a severe thunderstorm that caused damage in the city, according to a local report from WAVY-TV.

Some locals on Twitter said that a tornado touched down.

But, it’s unclear if it actually touched down in the city.

Other reports said a tornado touched down in West Virginia on Thursday.

Potential tornado touches down in Virginia Beach, VA this afternoon. Quite a mess!! http://t.co/EXkao0iOnl pic.twitter.com/vd25r1X5Az

Here’s an AP update for the storm:

VIRGINIA BEACH, Va. (AP) — A severe thunderstorm blew through southeast Virginia on Thursday, injuring 10 people near the oceanfront in Virginia Beach and causing extensive damage in the city.

Virginia Beach Fire Department Battalion Chief Amy Valdez said two of the injured were taken to a local hospital, while the others were treated at a fire station in the resort area of the city.

Valdez said multiple homes were damaged, power poles were knocked down and a church had its steeple knocked down. She said windows at some oceanfront hotels and businesses were also blown out. Police closed off several blocks of the city while damage was assessed and told the public to stay away.

In addition to wind damage, the storm also caused street flooding in Norfolk and Virginia Beach, making some roads impassable.

Dominion Virginia Power reported more than 5,000 customers were without power in southeastern Virginialate Thursday, with about 3,700 of those in Virginia Beach.