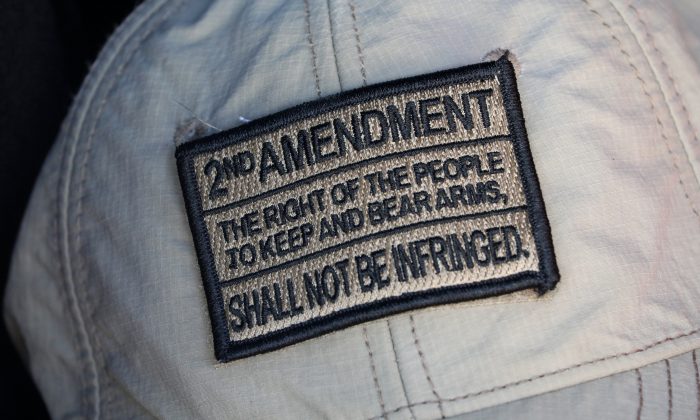 A hat referencing the U.S. Constitution's Second Amendment is pictured in the vehicle of an Open Carry Texas member in Houston, Texas, on Sept. 24, 2018. (REUTERS/Loren Elliott)
US News

The Virginia Beach City Council passed a resolution making the city a Second Amendment sanctuary, the latest such effort in Virginia as state lawmakers push for strict gun control laws.

Members of the public weighed in for more than three hours before council members voted. “This resolution is balanced in keeping with our Constitution and recent Supreme Court decision, and we ask the General Assembly respect citizens’ rights as they deliberate in Richmond over these very important and emotional issues,” Mayor Bobby Dyer said before the meeting.

The city government won’t use resources to prosecute gun control laws, according to the resolution. City officials also called, in the resolution, for state lawmakers not to pass any laws that would violate freedoms outlined by the state or in the Bill of Rights, stating, “the City Council expresses opposition to any law that would unconstitutionally restrict the rights of law-abiding citizens of the City to keep and bear arms.”

Virginia Gov. Ralph Northam said at a press conference with Democrat leaders on Tuesday that the gun control bills include a red flag law, a law restricting handgun purchases to once a month, and a universal background check law.

“Number one: Our eight pieces of gun legislation don’t threaten the Second Amendment. Number two: They are all constitutional,” said Northam.

“We have no intention of calling out the National Guard. We’re not going to cut off people’s electricity. We’re not going to go door to door and confiscate people’s weapons,” he added. “We’re going to pass common-sense legislation that will keep guns out of dangerous hands and keep Virginia safer.”

Virginia Attorney General Mark Herring, a Democrat, said last month that resolutions like the one passed by Virginia Beach have “no legal effect.”

The push to declare counties and cities as Second Amendment sanctuaries comes after Democrats won the state Senate and the House of Delegates in November 2019. With Northam also in office, Democrats have a tight grip on the power to make laws and have vowed to pass a slew of gun control measures.

One of the bills pre-filed by incoming Democrats, Senate Bill 16, proposed by incoming Senate Majority Leader Dick Saslaw, would change the definition of “assault firearm” in the state and make it a felony to own some pistols, rifles, and shotguns labeled as such weapons under the law.

The Second Amendment battle has played out nationwide. In Virginia, a slew of areas have taken action since November.

In Matthews County, for instance, the Board of Supervisors voted last month to make the jurisdiction a Second Amendment sanctuary. In another case, Chesapeake’s City Council passed a resolution last month affirming its commitment to citizens’ rights under the Second Amendment.

According to a list compiled by WAVY, at least 14 Virginia counties or cities have voted to either affirm rights or make Second Amendment sanctuary declarations.