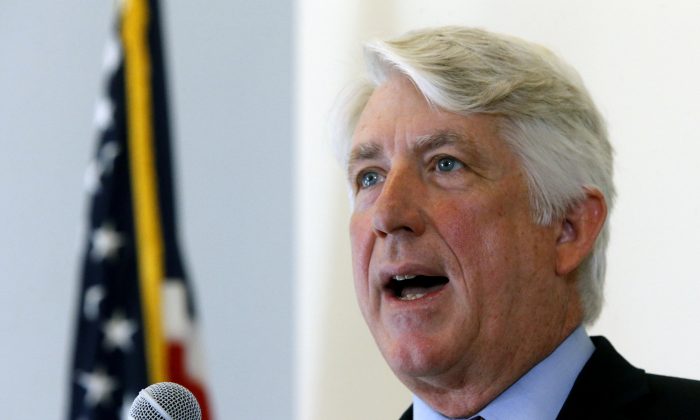 Virginia AG Says He Dressed in Blackface, Won’t Resign Despite Calling on Gov to Resign

Virginia Attorney General Mark Herring said he dressed in blackface when he was younger but said he won’t resign, despite calling on Virginia Gov. Ralph Northam to resign after a picture emerged from Northam’s yearbook page that showed one man in blackface and the other wearing Ku Klux Klan gear.

It’s the latest turn of events in the state that now has the three top lawmakers embroiled in controversies but all refusing to step down.

The dilemma started with Northam’s controversial abortion comments, when he seemed to say he approved of infanticide.

Then the picture emerged from Northam’s medical school yearbook, igniting calls for him to step down and expectations that Lt. Gov. Justin Fairfax would become governor.

Northam initially said he was one of the men in the picture but later flipped, saying he was not in the picture. He didn’t explain why it was published on his yearbook page and why under a clear picture of him in the yearbook, he was nicknamed a racial epithet.

As Northam tried to avoid resigning, a sexual assault allegation against Fairfax was also made public. Fairfax has denied the allegation, but admitted he’d had an encounter with the woman that he said was completely consensual.

Now Herring is facing criticism after he admitted on Feb. 6 that he, too, once dressed in blackface.

“In 1980, when I was a 19-year-old undergraduate in college, some friends suggested we attend a party dressed like rappers we listened to at the time, like Kurtis Blow, and perform a song,” he said. “We dressed up and put on wigs and brown makeup.”

“This was a onetime occurrence and I accept full responsibility for my conduct,” he added. “This conduct is in no way reflective of the man I have become in the nearly 40 years since.”

Herring did not say he was stepping down.

Please see my statement below. pic.twitter.com/FBDcgxHOq9

However, just days before his disclosure, Herring had called for Northam to step down.

“It is no longer possible for Governor Northam to lead our Commonwealth and it is time for him to step down,” said Herring in a statement.

“I have spoken with Lieutenant Governor Fairfax and assured him that, should he ascend to the governorship, he will have my complete support and commitment to ensuring his success and the success of our Commonwealth,” he said.

Northam, Fairfax, and Herring are all Democrats while Cox is a Republican.

Cox and state Republicans have called on Northam to resign.

“When the racist picture first emerged, we were shocked and repulsed,” he and other top state Republicans said in a joint statement. “The photo is disturbing and offensive, as unacceptable in 1984 as it is today.”

The lawmakers said that they withheld judgment as they awaited an explanation from the governor. But when Northam admitted he was in the picture, the politicians said they supported the choice of the Virginia Legislative Black Caucus to push for Northam’s ouster.

“While we respect the Governor’s lifetime of service, his ability to lead and govern is permanently impaired and the interests of the Commonwealth necessitate his resignation,” the group stated.

Cox has not called on Fairfax or Herring to resign.