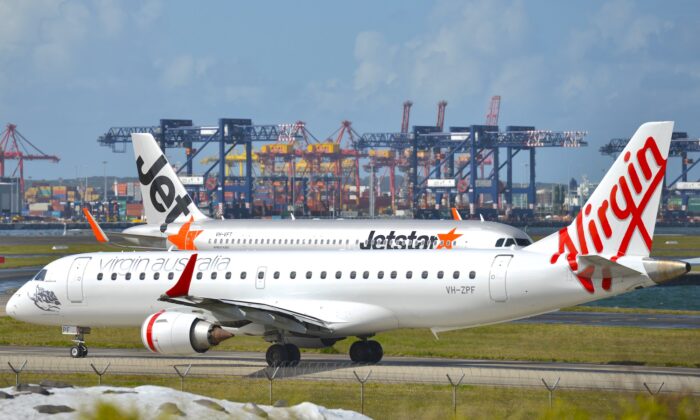 Virgin Australia and Qantas Group announced on April 16 that they would resume a limited schedule of domestic flights to help maintain freight links and options for essential travel for Australians.

Deputy Prime Minister Michael McCormack said the government will underwrite the cost of the network to the tune of $165 million (US$105 million).

The announcement comes amid a week of uncertainty about Virgin’s future and the presence of a contagious passenger onboard a Qantas flight.

The temporary regional network will focus on towns that are more than two hours’ drive from key hubs.

“We know that a strong domestic aviation network is critical to Australia’s success and today’s announcement demonstrates our commitment, yet again, to maintaining connectivity during this pandemic,” McCormack said in a press release.

The new schedule aims to provide secure and affordable flights for passengers who need to travel for essential work, such as frontline medical personnel and defence personnel. Non-essential workers are asked to stay home.

“We are ensuring secure and affordable access for passengers who need to travel, including essential workers such as frontline medical personnel and defence personnel,” McCormack said.

In addition to essential domestic flights, the airlines will continue to help the government bring home Australians from overseas.

Virgin took to social media to announce the decision on April 16, saying, “Today we announced that we’re bringing back a limited domestic flying schedule from tomorrow until 7 June 2020. Flights will progressively go on sale from tonight.”

We’re here to help you get home ✈️. Today we announced that we’re bringing back a limited domestic flying schedule from tomorrow until 7 June 2020. Flights will progressively go on sale from tonight, book now: https://t.co/yBaCsIyO0h pic.twitter.com/b8NCW2hyN6

Qantas Group said the new domestic schedule will increase the number of passenger flights they operate from 105 per week to 164 per week. They thanked the federal government for providing the new support, which adds to the $715 million (US$453 million) in rebates already provided to the aviation industry.

The Australian government has implemented a stimulus measure to help businesses “hibernate” during the crisis caused by the CCP (Chinese Communist Party) virus, commonly known as novel coronavirus.

One such measure is the Jobkeeper package that provides employers $750 (US$475) per week to retain its employees—in every industry—which is to be passed on in full to employees.

Qantas said while the risk of contracting the CCP virus onboard aircraft is low, they will be implementing social distancing measures across all flights.

The new flights roll out on Friday, April 17 and will operate until June 7.