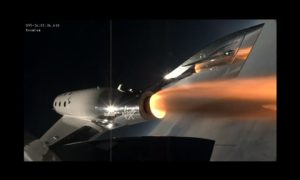 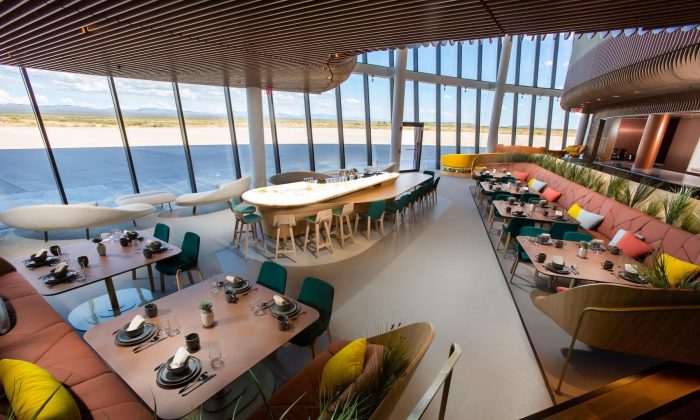 The company on Aug. 15 shared images of the interior at Spaceport America in New Mexico. Ticket holders, most of whom paid $200,000 or more for a Virgin Galactic flight, will one day congregate at the spaceport before they board a supersonic plane for a 90-minute ride into the upper atmosphere.

The renovations are another sign that Virgin Galactic is preparing to open for business at Spaceport America, a controversial facility that was built a decade ago using local taxpayer dollars.

Images of the first-floor lounge area show a large coffee bar made of “back-lit Italian marble hovering above hand-crafted oak,” according to a press release. Modern couches line the floor-to-ceiling windows at the spaceport with panoramic views of the surrounding desert. Other new facilities include a mission control center, a working area for pilots, and a briefing center.

Branson’s company spent 15 years building and testing its space plane in California’s Mojave desert. It took much longer than expected, in part because of a 2014 accident that killed a co-pilot.

Spaceport America has elicited plenty of pushback in New Mexico. Critics have called the project a deeply flawed plan to reinvigorate the state’s economy with commercial spaceflight. The facility continues to eat up millions of tax dollars while sitting empty.

“We’re not just talking about the people we’re sending into space, we’re talking about [bringing out] family and friends,” Branson said during an interview with CNN Business in May. “There’ll be flight training inside the spaceport, and there’ll be places to eat for their families, hot air ballooning, fishing and mountain bike riding, etc etc. That’s something that we’ll be organizing.”

After two successful test missions of its rocket-powered space plane over the past few months, the company announced in May that it was ready to move 100 of its workers to the New Mexico spaceport. Some other workers will stay in Mojave at Virgin Galactic’s manufacturing headquarters.

Virgin Galactic said it will unveil other developments at the spaceport later this year.

The company earlier this year became the first space tourism venture ever to list on a stock market, via a venture called Social Capital Hedosophia Holdings. Analysts and experts are divided about whether the venture will sustain enough interest among the world’s ultra-wealthy to maintain a healthy book of business and recoup its steep R&D costs.

The company is squared up to compete directly with Blue Origin, a space tourism venture founded by Amazon multibillionaire Jeff Bezos. Blue Origin has conducted numerous test flights of its autonomous spacecraft, which is designed to carry passengers on suborbital trips to space. The company said earlier this year that it hoped to start flying passengers in mid-2019, though it has not said how much it will charge customers for rides.