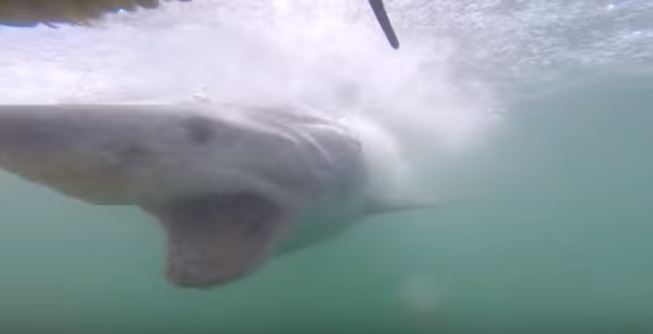 Two American tourists on their honeymoon got a huge shock when a great white shark came hurtling toward their diving cage, missing them by inches.

Footage captured by Spencer Reilly, half of the couple, shows the shark hurtling out of the water toward the cage, before biting part of the metal near his wife’s arm, and another person’s head.

The animal was chasing a string of bait.

Though people online say the footage has been edited to make the shark look faster, Reilly told 9News that the vision was not sped up.

“That should not have happened really, they don’t like the shark to get too close to the cage but there was low visibility and the shark came at the bait extremely fast,” Reilly said. “It was not too scary because it happened so fast, and then it was pretty exhilarating.”

The dive was in South Africa off the coast of Gansbaai, about 100 miles southeast of Cape Town.