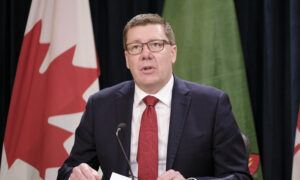 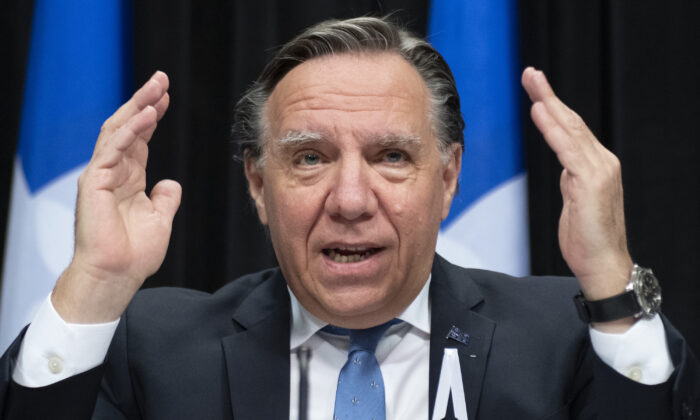 Quebec Premier Francois Legault announces there will be no family gathering outside the actual family cell for Christmas, during a news conference on the COVID-19 pandemic, Thursday, Dec. 3, 2020 at the legislature in Quebec City. (Jacques Boissinot/The Canadian Press)
Canada

A video that went viral on social media shows the police raiding a Quebec residence after a neighbor reported a private gathering that had violated provincial COVID-19 rules.

The video (Warning: contains offensive language) was filmed at a home in Gatineau on Dec. 31, 2020. The New Year’s Eve gathering of six people with individuals from outside the household was a clear violation of Quebec’s public health restrictions.

Shouting and profanity rang throughout the video as the police yanked a man through the residence door and pinned him to the ground. An elderly woman is seen grabbing onto the man from behind in an attempt to wrestle him back indoors. Another woman was outside in the yard, already handcuffed.

Éric Simard, a lieutenant officer with the Gatineau Police Service (SPVG), confirmed that the agency intervened at around 11 p.m. after receiving a “citizen’s complaint.” He told Journal de Montreal that SPVG agents had first asked the residents to voluntarily end the gathering, but were rejected.

“The video shows only an extract of the intervention. The individuals were recalcitrant and refused to cooperate. The individual arrested in the video had assaulted a police officer, hitting him in the face a few times,” the Gatineau police wrote in French on Twitter on Dec. 3.

“Offense = obligation to identify oneself. A second person was also arrested and 6 reports issued (Public Health Act). We ask for your collaboration to continue to respect the sanitary measures and to collaborate during any police intervention.”

Mathieu Tessier, the man who was arrested, posted the video on Facebook and said that he tried to intervene when he saw the police pulling his mother by the arm.

“I go in the middle of them so they can leave my mother alone so I can close the door and talk,” Tessier told CBC. “You’re supposed to protect us but right now you don’t have [a] mask so you put my life in danger,” he said.

An observer pointed out on Twitter that an officer on-site was seen without a mask, drawing a response from the Gatineau Police.

“First 2 officers were wearing their masks, speaking outside with the owner,” the police wrote. “Some people became aggressive. One male hit an officer multiple times in the face. The officers who were not wearing masks were called as backup and, due to the emergency, didn’t have time to put it on.”

On Dec. 3, Quebec Premier Francois Legault announced a ban on all gatherings in most parts of the province due to increased cases of COVID-19 infections. Gatineau is notched in “level 4-maximum alert” under the Quebec tiered restriction measures. The only exception for gathering is for a single-person home to have one visitor from another address.

Quebec applied special restriction measures to private gatherings, offices, schools, and recreational facilities that would last from Dec. 17, 2020, to Jan. 10, 2021.