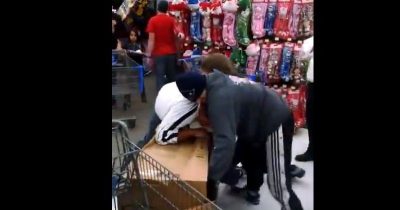 Men squabble over a toy during Black Friday. (Screenshot via Youtube/Newsstar 2018)
US News

It’s unclear exactly where the scene was captured, but it appears to be a Walmart.

“You’re breaking it!” one woman tells the men. “Stop! Let go,” another can be heard saying.

The younger man wearing a letterman jacket with the words, “Turner 2017,” gives up before two other men squabble over the item.

An employee arrives and tells the them that “neither” of you “will get it.”