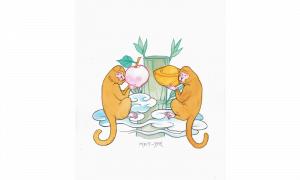 The babies weigh only about a half an ounce apiece. Fully-grown pygmy marmosets usually tip the scales at around 3 ounces.

Since their birth, the newborns have spent a good amount of time riding around on their mother’s back. Workers recorded and shared footage of one such escapade on the wildlife park’s Facebook page.  The video has captured the hearts of many and is well on its way to taking over the Internet.