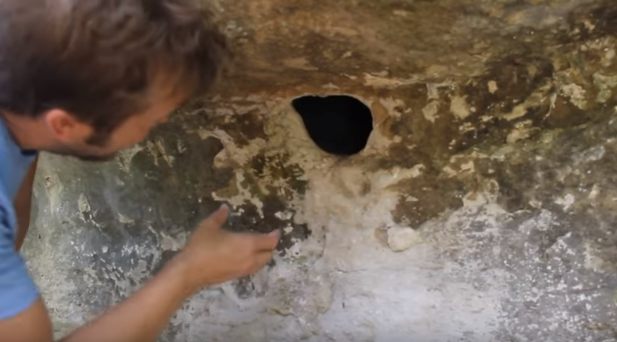 Viral Video: Man Pulls Clump of Arachnids out of Hole in Rock as Children Scream

A new video shows a man reaching into a hole in the rock and pulling out a dark clump.

It quickly becomes evident that the clump is in fact hundreds of small arachnids, which start to scatter as children scream in the background. The spiders in the video fall under the “daddy longlegs” designation, which refers to the 6,000 species of arachnids that fall into the Opoliones order.

Most daddy longlegs, also known as harvestman, are omnivorous and feed on small insects, mites, snails, and vegetable matter. YouTube user Wheatbreat, who posted the video, says there was plenty more spiders in the hole. “I never even touched the back of the hole- endless spider supply!” he said.

The creatures often clump together in dark spaces as a form of protection.

According to the University of Michigan, Opiliones “have small round bodies with eight very long, very thin legs.”

“Like ticks and mites, harvestmen have evolved a tight connection between the two body sections that other Arachnids have. Their whole body is one round unit. On either side of their mouth they have short appendages called pedipalps that they use to hold food while they chew it,” it adds.

There is a myth about daddy-longlegs that says they’re one of the most deadly spiders, but their fangs are too short to bite humans.

But according to the University of California, Riverside, tha’s false.

“These arachnids make their living by eating decomposing vegetative and animal matter although are opportunist predators if they can get away with it. They do not have venom glands, fangs or any other mechanism for chemically subduing their food,” the university’s website states.

People commenting on the viral video found it somewhat disturbing.

“No freaking way. Never ever will I go near one of these holes,” said one Facebook user.

“I WOULD NOT do this. I have mostly gotten over my arachnophobia but this is a little too much for me, even watching it,” said another.