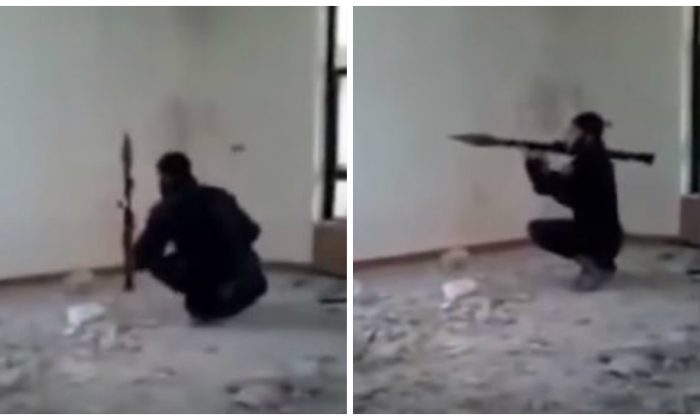 Viral Video: ISIS Fighter Blows Himself up With Rocket Launcher

A new video apparently showing a terrorist accidentally blowing himself up has gone viral online.

The video, which was uploaded to LiveLeak.com, purportedly shows an ISIS fighter attempting to fire a rocket-propelled grenade (RPG) at his enemies.

It’s unclear where the video was taken, or if the fighter actually blew himself up. The “explosion” left by the RPG could easily just be the rocket’s backblast.

The man crouches down and points the weapon out of a hole in the wall that appeared after a previous explosion. Here’s the footage (*WARNING: It might be disturbing for some viewers):

But his attack doesn’t go as planned as the projectile appears to explode in his hands, with smoke engulfing him.

The footage cuts away after the explosion.

Meanwhile, a study has found 300 active online ISIS supporters in the United States.

Researchers at George Washington University’s Program on Extremism said recruiters primarily user Twitter to encourage like-minded people to travel to Syria or Iraq, where ISIS is based, to join the group’s “caliphate,” or to plan attacks inside the U.S.

In one instance, the study’s authors wrote, “[a] seemingly naive individual posted general questions about religion [on Twitter], to which ISIS supporters quickly responded in a calm and authoritative manner. After a few weeks, the accounts of hardened ISIS supporters slowly introduced increasingly ardent views into the conversation.”