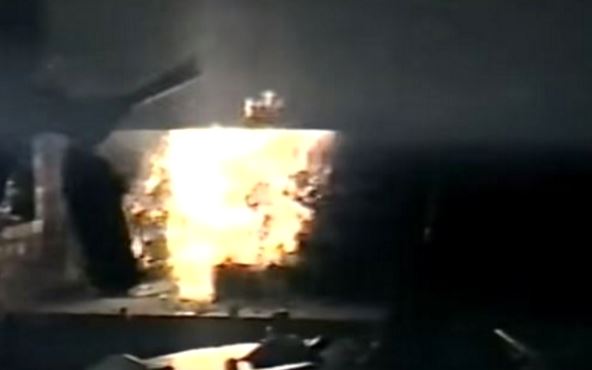 An old video of late journalist Hunter S. Thompson setting his Christmas tree on fire has surfaced and gone viral.

The video shows Thompson at his Colorado cabin, which he dubbed Owl Farm.

Thompson’s secretary Deborah Fuller would take down the tree after the holiday every year and leave it on the front porch because he liked to set it on fire.

In January 1990, Sam Allis, at the time a writer for TIME magazine, visited to behold the tradition.

“I gave up on the interview and started worrying about my life when Hunter Thompson squirted two cans of fire starter on the Christmas tree he was going to burn in his living-room fireplace, a few feet away from an unopened wooden crate of 9-mm bullets. That the tree was far too large to fit into the fireplace mattered not a whit to Hunter, who was sporting a dime-store wig at the time and resembled Tony Perkins in Psycho,” Allis wrote.

“Minutes earlier, he had smashed a Polaroid camera on the floor. Hunter had decided to videotape the Christmas tree burning, and we later heard on the replay the terrified voices of Deborah Fuller, his longtime secretary-baby sitter, and me off-camera pleading with him, ‘NO, HUNTER, NO! PLEASE, HUNTER, DON’T DO IT!’ The original manuscript of Hell’s Angels was on the table, and there were the bullets. Nothing doing. Thompson was a man possessed by now, full of the Chivas Regal he had been slurping straight from the bottle and the gin he had been mixing with pink lemonade for hours.”

In another portion, Allis recalled:

“When Hunter tossed a lit match at the Christmas tree, it exploded into flames. He took a few pulls on the fire extinguisher and then joined us outside. The view from the porch through the window resembled something out of Watts in 1965. The chimney was on fire. His five peacocks, whose roost was separated from the living room by a thin pane of glass, were not happy. Nor was Hunter, who yelled at me, ‘GET BACK IN THERE, FOOL!’ He had given me an iron prodder with which I was to keep pushing the tree into the fireplace. ‘I’M NOT GOING BACK IN THERE,’ I yelled back. The whole room was full of smoke, and flames kicked up onto the mantel and on toward the ceiling. Thompson dashed back in and did battle with the tree.”