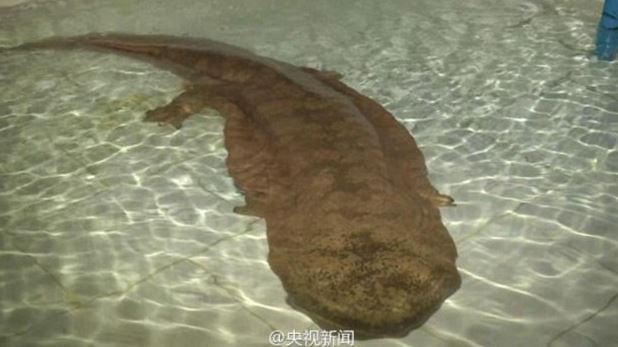 Viral Video: Giant Salamander Discovered in a Cave in China

A Giant salamander thought to be over 200 years old was recently discovered in an isolated cave in southwest China.

The cave is located in Chongqing.

Wildlife experts decided to transfer the creature to a local research facility for further study.

The Chinese Giant salamander species is the largest living species of amphibian, according to the Zoological Society of London. There are reports of the monsters growing as long as 9 feet.

The animal is now critically endangered after massive population decline over the past 30 years stemming from the over-harvesting for food as well as habitat destruction.

Giant salamanders are heavily built with a flat, broad head and a truncated snout. It also has a wide mouth, small round eyes that lack eyelids, and small, rounded nostrils. They have small but numerous teeth, and their bite is very powerful.

Salamanders in captivity typically only live to around 50 years, prompting the study of this creature.