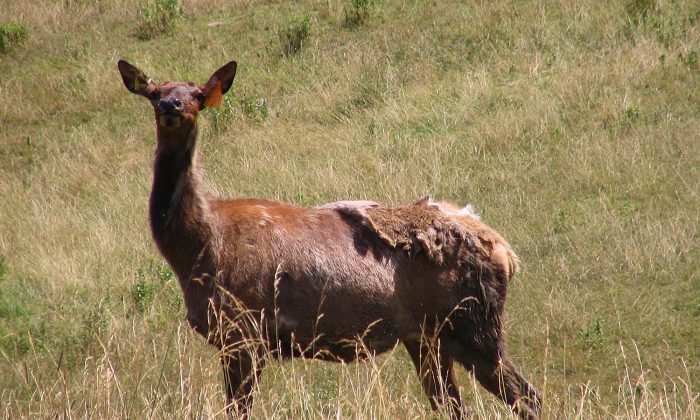 A viral video shows the moment an elk became seemingly aggressive with a photographer only to leave onlookers in amazement.

The photographer was capturing footage of the elk in the Great Smoky Mountains National Park.

“A young bull elk decided to start some trouble,” said the video description. “All the photographer could do is protect himself” and hope that the elk loses interest, it added.

The elk is seen moving its horns about the photographer’s head as he sits on the ground and crouches.

The photographer is able to get a few could images amid the ordeal.

At one point, the elk is seen with its antlers down before moving back suddenly before putting its antlers in the photographer’s face again.

After a few minutes, the photographer gets up and moves to a car before the elk grabs his gear. He then picks it up.

“While photographing elk at sunrise in the Cataloochee Valley of Great Smoky Mountains National Park I turned around to see what appeared to be just a curious young bull sniffing a photographer’s camera. I snapped a few frames of the apparent harmless encounter,” said the description of the video. “But the elk became more interested in making trouble than simply the scent of a camera. He started physically harassing the photographer, escallating to full on head-butts.”

The photographer said that “wow, he’s getting pretty damn close here,” adding that he has “been up close before without incident. I hoped being still and passive would see him pass on.”

“When he lowered his antlers to me, I wanted to keep my vitals protected and my head down. I felt that standing up would provoke him more and leave me more vulnerable to goring. I think that while protecting myself with my head down, having my head down was a signal that I was rutting with him. I was concerned at first, but when he started rearing back and lunging at me later on, I got scared and pissed off. That’s when I wagged my finger at him to cut that [expletive] out. I was relieved to see the Ranger coming,” he said.

According to National Geographic, “In the winter, elk reconvene into larger herds, though males and females typically remain separate. The herds return to lower valley pastures where elk spend the season pawing through snow to browse on grass or settling for shrubs that stand clear of the snow cover.”

It adds: “Elk were once found across much of North America but they were killed off and driven to take refuge in more remote locations. Today they live primarily in western North America, especially in mountainous landscapes such as Wyoming’s National Elk Refuge and Yellowstone National Park. Some eastern U.S. states have reintroduced small elk herds into heavily wooded wilderness areas.”