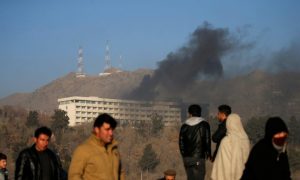 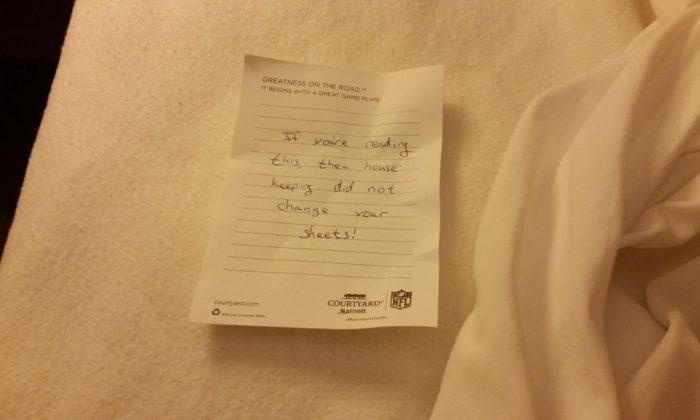 An Imgur and Reddit user shared a photo of a note that was left on his hotel bed.

The user wrote that as they were trying to sleep, they “heard something crinkle when I settled in for the night.”

The Daily Mail reported that the user stayed at the Courtyard Marriott hotel.

“If you’re reading this, then housekeeping did not change your sheets!” read the note, suggesting that the bedsheets were dirty and reused.

Some users commented that they found more disturbing items in their hotel room and bed.

“My husband found a pair of used underwear and a couple bottles of nips [miniature spirit bottles] in the bed side table,” said one.

Another added: “I walked into a hotel room once with an unmade bed, a half-drunk case of Busch [beer] under the sink, damp towels everywhere and the TV was on. It wasn’t even the wrong room. Housekeeping just didn’t even go in that day.”

The Redditor’s note points to a commonly held notion that hotel rooms aren’t as clean as one might think, as maids have to go through dozens of rooms each day and may not be able to clean them properly.

In 2013, a maid gave an interview to the Huffington Post about common practices and the amount of work hotel staff have to do, saying “sometimes it’s so busy and management still expects everything to be cleaned just as fast as a day that isn’t as busy.”

“Where I work now, pillows and bedding are replaced at every check-out. However before when I used to work at a budget hotel we rarely changed them, even when there were sweat stains or marks on the pillow we would just cover it with a new case—some differences between staying in a budget hotel to a luxury hotel,” she said.

According to a 2014 report from Today.com, hotel maids don’t always do a great job when cleaning rooms.

At a DoubleTree hotel (part of Hilton Worldwide), the cameras recorded a maid stripping the bed while putting the pillows off to one side. She replaced the sheets with fresh ones, but after a quick fluff, the same pillows went right back on the bed.

The maid also scrubbed everything down in the bathroom. Then she used a towel to dry the toilet and the shower, and used the same towel to quickly scrub the counter—the same place a guest would put their toothbrush.

Jacob Tomsky, a former hotel housekeeping supervisor who wrote “Heads in Beds: A Reckless Memoir of Hotels, Hustles, and So-Called Hospitality,” told the website that “what really bothered me was that she put the pillowcase on a dirty chair prior to putting it back on the bed. That just gets it even more dirty.”

The No. 1 worst-rated hotel in the United States, by location, was the Heritage Marina Hotel in San Francisco, California, according to Cheatsheet.

One TripAdvisor user wrote: “When I arrived the staff lost my reservation. They were very rude but found a room for me. As soon as I got into the room and sat down on the bed I realized there were BED BUGS ALL OVER the beds, walls, everywhere!!! I was so disgusted I left and drove home. Now almost a year later bed bugs are HAUNTING ME!!! DO NOT STAY HERE!!! DO NOT!!!!!”

A number of people reported that the hotel has a severe bedbug problem.

No. 2 on the list is the Boulevard Hotel Ocean Drive in Miami Beach, Florida. The reason is it’s dirty and has safety issues.

One person wrote: “DIRTY ROOMS, with GLASS in the actual bed under the sheet. I was STABBED in the butt!!! Yes the left cheek of my buttocks by a piece of GLASS that was in the bed. I could not stop BLEDDING (sic), the ambulance and police was called out.”

And No. 3 on the list is the Tropicana Resort Hotel in Virginia Beach, Virginia.

“If there was a way to rate this with negative stars I would! -5 stars!!! Horrible, gross, worst hotel ever! Dirt, funk, mold, and horrible smell!” wrote one TripAdvisor reviewer.