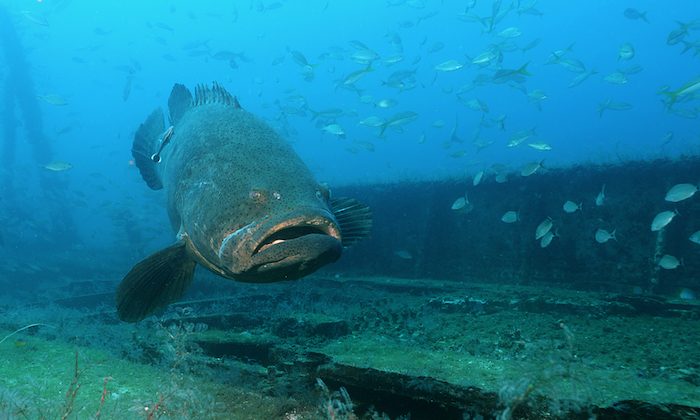 The moment a Florida man captured a Goliath grouper, which are known to eat small sharks, has been immortalized on YouTube.

“Josh and Dr. Robert Borrego headed offshore to a shallow water wreck on the east coast of Florida. Josh started off playing with a large congregation of monster bull sharks,” the description read.

“Several cobia came up with the sharks. Josh hooked one of the cobia and fought it for several minutes. The cobia was being chased by a bull shark. Josh tightened the drag and palmed the spool, breaking off the cobia,” he added.

Then, the grouper appeared.

“After a struggle, the 200lb+ goliath grouper was boat side. The hook was removed and the grouper was quickly released. Josh started playing with the groupers and a monster goliath attacked the bonito on the rope (probably over 500lbs)!” he wrote.

The fishermen managed to get the grouper on the boat before it was quickly released.

‘Just Sucked it In’

The moment a Goliath grouper eating a shark was captured on camera as shocked fishermen look on.

The Everglades Fishing Company said the grouper was probably about 500 pounds.

“Watch this. You guys are going to freak out,” Jimmy Wheeler of the Everglades Fishing Company warned.

“He just sucked it in,” Michelle Wheeler told Fox News. “I don’t remember ever seeing anything this crazy.”

“That same grouper later swallowed a stingray — or manta ray,” Michelle added. “[Goliath groupers] have become a nuisance, according to a lot of fishermen. They’re eating everything.”

According to the report, groupers have been protected under Florida state law since 1990. They have to be returned to the ocean after being caught.

The fishermen indicated that they were planning to catch and release the Goliath grouper.

They can get to be 8 feet in length.

“We snorkel and see they’ll just go by a fish and suck it in. They’re huge. They didn’t get that way from not eating,” Michelle told Fox.