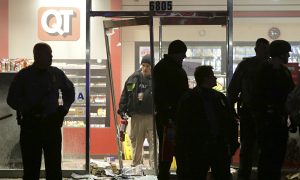 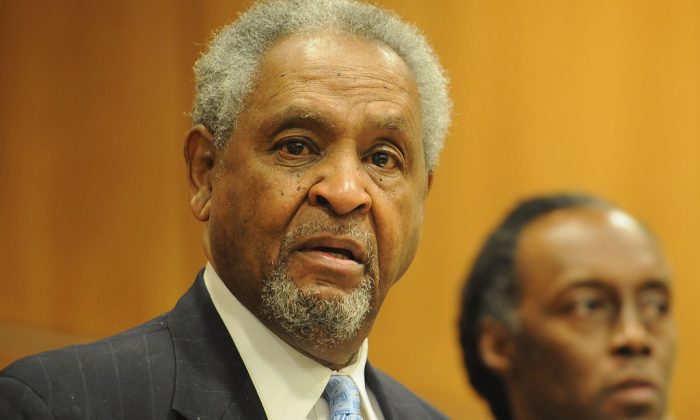 Berkeley Mayor Theodore Hoskins at a press conference in Berkeley, Mo., on Dec. 24. (Michael B. Thomas/AFP/Getty Images)
US

Hundreds of protesters violently clashed with police Tuesday night in Berkeley, Mo., after a police officer fatally shot Antonio Martin, who had pointed his pistol at the officer, around 11:15 p.m. Tuesday.

The Mobil gas station was a mere 2 miles away from Ferguson, where protests have been ongoing for months after the fatal shooting of Michael Brown. Nearly 300 protesters, many who believed that Martin was unarmed, swarmed the location where Martin died shortly after.

Some threw bags of rocks at the police, and others lobbed explosives made from bunched-up fireworks. Four were arrested for assault, and three officers were injured, with one still in the emergency room, authorities said, and some police cars were also damaged.

“This is a tragedy for everybody and our heart goes out to the family,” St. Louis County police chief Jon Belmar said at a press conference Wednesday morning.

Surveillance videos from the gas station showed Martin raising and pointing his gun, a 9 mm high-point pistol, at the officer, who stumbles back and falls on the ground before firing three shots, one of which hits Martin.

The dash-camera on the officer’s vehicle was not on that night, and he wasn’t assigned a body-camera that day, Belmar said.

The officer, a six-year veteran of the police force, was responding to an emergency call reporting theft, Belmar said, and did not have any record of altercations with civilians.

The officer was alone at the time, Belmar said.

Berkeley Mayor Theodore Hoskins, who like Martin is black, defended the police at a press conference Wednesday, and told the public not to draw comparison between Martin’s death and that of Brown or Eric Garner, whose deaths at the hands of police officers have sparked protests around the country.

“You couldn’t even compare this with Ferguson or the Garner case in New York,” Hoskins said. “We have the video. The video shows that the thief pointed a gun, that has been recovered, at the officer.”

The police have released photos of the gun, which they said had five bullets in the magazine.

He was also arrested for unlawful use of a weapon and an armed robbery in May, but had not yet been charged by the St. Louis County prosecuting attorney, the Dispatch reported.

Hoskins’s rhetoric has been echoed by other black politicians in Missouri.

Jerome Green, Martin’s father, told the St. Louis Post-Dispatch that his son as a “follower” who took medicine for being hyperactive.

“It was hard for him to focus,” Green told the Dispatch.

Martin’s parents acknowledge that he had a criminal record, but said that he had recently turned a corner.

“In the last year, he was really trying to find who he was. He was ready to take the world on,” Green told the Dispatch. “He knew he had parents who loved him. He had that support. He was not a violent person, to our knowledge. Around us there weren’t any pistols. It’s hard to believe that.”

Police said that as a result of the protests, the investigation of Martin’s death, which is ongoing, had been disrupted.