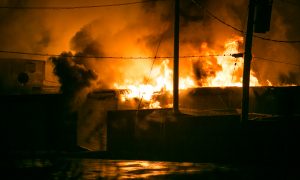 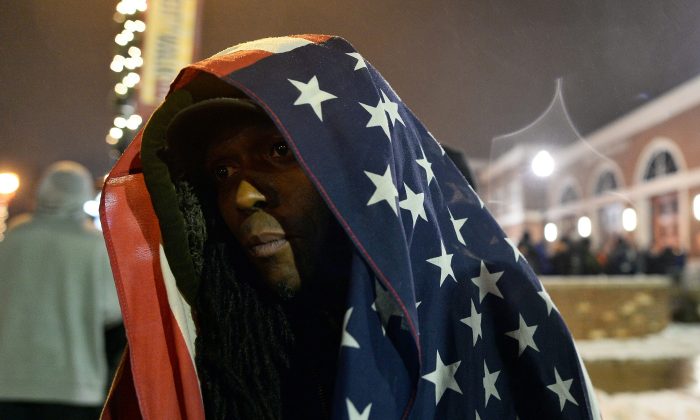 A protester covers himself with a US flag during a demonstration outside the police station in Ferguson, Mo., on Nov. 26, 2014. (Jewel Samad/AFP/Getty Images)
Ferguson

FERGUSON, Mo.—The night after the grand jury decision in the Michael Brown shooting case was announced, protesters were out again in force at different locations around St. Louis.

Nowhere did the situation become as volatile and dangerous as it did in Ferguson.

In front of the Ferguson police station, protesters gathered in a crowd for a ritual that some locals have come to call “just another night in Ferguson.” Even before the grand jury decision was announced, this spot had become the de facto location to face off with law enforcement.

On this night—just 24 hours after Ferguson became a lawless canvas of marauding bandits who fired weapons, set buildings and police cars on fire, and shattered windows—more than ever, there seemed to be less certainty about what would happen.

That sentiment was only deepened by Gov. Jay Nixon’s announcement earlier in the day that 2,200 more National Guardsmen would be deployed to Ferguson. That number is equivalent to about 10 percent of the town’s population.

At the police station on Ferguson’s version of Main Street, South Florissant, dozens of police were joined by some of those troops. The mood of the crowd swung between jovial at times to angry and frustrated.

As usual, the police had little response. When they did speak, they were unusually polite.

“Get off the sidewalk and on the street, please,” said one officer gently, almost unsettlingly. “Get back, please.”

At times, traffic was blocked but protesters remained largely on one side of the street. A neighborhood resident, a man whom everyone seemed to know and respect, helped direct traffic and kept the crowd from advancing too far toward the police. It was the Ferguson version of law and order. Aside from a few sporadic arrests, the night proceeded with little incident.

Then someone from the back of the crowd threw a smoldering smoke bomb. Then there was another. It was just enough to ratchet up the anxiety level of everyone there—the protesters, the police, the onlookers, the media, and the clergy.

One woman tried to call for four and a half minutes of silence “out of respect for the dead,” but to no avail. Another woman tried to steer the crowd toward activism, but her efforts were futile.

Slowly but surely, small bands of men with bandanas over their faces began to appear out of the night to join the crowd in groups of four or five. On the other side of town along Ferguson’s other Main Street, West Florissant, where so much damage had been done the night before, rumors of more fires and gunfire began to circulate.

But by all accounts, it was a peaceful night, if sometimes a bit rowdy. Then from the sky came what seemed to be the turning point. A police helicopter hovered above, shining its spotlight on people, which seemed to anger the crowd.

“Come on, let’s go!” yelled a man, gesturing as he and several others started out purposefully in the direction of City Hall.

The crowd followed in what looked like an impromptu protest march. Along the way, men in uniforms peeked down at the crowd from the roofs of buildings, shying away at the sight of cameras.

At the corner of Church Street, everyone turned and converged on a parked police car. They stood on top of it like a hunter who had just shot big game, posing for a photo. The car windows were smashed with bricks and someone tried to set it on fire and failed.

Several people managed to tip it onto its side and it rocked back to the ground. Others converged on the glass facade of City Hall nearby and smashed every window they could with reckless abandon.

The sickening sound of crushing and breaking glass seemed to be everywhere.

When the police finally arrived, they were slow to make a move. It was not until the rear window of a police SUV was smashed with a brick that they sprang into action. Almost immediately tear gas canisters were everywhere on the street, scattering journalists, videographers, protesters, and lawbreakers. Those who remained were corralled onto two ends of the street.

Most were pushed back to the main road and converged in an angry, screaming crowd.

In the end, the actions of a few in a crowd of many caused the loss of rights to the entire crowd.