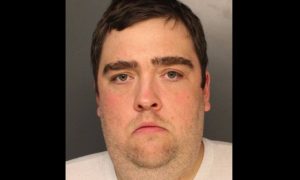 Antifa Member Charged in Assault of US Marines Near ‘We the People’ Rally in Philly: Reports
0
Share Now
TelegramFacebookTweetEmailTellMeWeReddit
Copy Link
Crime and Incidents

Violent May Day clashes erupted in Portland moments after police initially announced that the day’s events had mostly been peaceful.

“Overall, the events were peaceful in nature,” Portland police said in an initial statement at around 7:30 p.m. on the evening of May 1. “For a short time, some streets were blocked in the Southwest waterfront area. The police sound truck made announcements for people to get out of the street for everyone’s safety. The group eventually moved back to the park and then dispersed.”

But in a later statement at around 10 p.m., police noted that a disturbance had taken place, in which “an estimated 60 people were involved in a fight and someone may have deployed mace.”

Footage posted to social media showed multiple violent confrontations, including between what has been reported to be far-left Antifa protesters and demonstrators affiliated with the Proud Boys and Patriot Prayer groups.

In one video posted by freelance journalist Andy Ngo, Patriot Prayer leader Joey Gibson is seen talking to someone as a masked black-clad individual runs up and hits him with pepper spray before turning the stream towards Ngo and his camera.

“I was sprayed in the face point blank with pepper spray outside the @CiderRiot, where Antifa had amassed,” Ngo wrote. “They cheered as I was blinded. Before that, they threatened me & brought up my mother’s name.”

I was sprayed in the face point blank with pepper spray outside the @CiderRiot, where Antifa had amassed. They cheered as I was blinded. Before that, they threatened me & brought up my mother’s name. A woman helped me across the street. Please help me identify person: pic.twitter.com/BUxlk94fz4

“There was a riot outside the Cider Riot,” Ngo wrote in another post on Twitter. “I was attacked point blank with pepper spray. A student journalist from Oregon State had his camera smashed & destroyed.”

Please help me identify this masked antifa woman who assaulted me outside the @CiderRiot on 807 NE Couch St on 1 May, 2019 at approximately 7:40 p.m. pic.twitter.com/yRcGDw8tRM

Ngo said he believed the venue had been used a base of operations for the far-left activist group.

“Seemed bizarre to me that it didn’t look like Cider Riot was just place antifa had amassed to have drinks,” Ngo wrote. “It looked like they were using business as base to prep attack. Turns out CR had hosted the May Day party WITH Antifa.”

Seemed bizarre to me that it didn’t look like Cider Riot was just place #antifa had amassed to have drinks. It looked like they were using business as base to prep attack. Turns out CR had hosted the May Day party WITH Antifa. From their business FB page: https://t.co/Lg1uIOW8O5 pic.twitter.com/plB7dpvt9A

In one of his videos, opposing groups are seen hurling bottles and other projectiles at one other outside the Cider Riot bar, with the confrontation punctuated by streams of pepper spray.

breaking: far-right protesters and Proud Boys have arrived at Cider Riot. Cider Riot has done benefits for antifa and has also been vandalized in the past. RIOOOT. huge fight! pic.twitter.com/PKeRdYCF6d

Another clip shows of a woman being pulled along the ground with the caption “OMG A GIRL GOT KNOCKED OUT CLEAN.”

OMG A GIRL GOT KNOCKED OUT CLEAN, pic.twitter.com/C3wdqOKLIT

Bivins posted another video showing a duel between “masked antifa” and a “guy in anti-communist action shirt.”

round one of an MMA fight between guy in anti-communist action shirt and masked antifa outside cider riot pic.twitter.com/KOsjds9XS3

Ngo also later posted footage of a masked individual holding a skateboard that he said, “punched me unprovoked in the abdomen.”

This is the unknown masked individual who punched me unprovoked in the abdomen. I immediately spoke to the @PortlandPolice liaison several yards away who told me that it would be an “escalation” for police to approach the individual so he wouldn’t do it. #MayDayPDX #antifa pic.twitter.com/LUWofc4ZES

In another violent incident, videographer Brandon Farley said he had been assaulted by a local Antifa leader Luis Marquez after Farley confronted him over sexual assault allegations.

I was just Assaulted by Luis Marquez, the Leader of #Antifa at #MayDayPDX Protest. #NextCharlesManson #PedoBasement

I tried filing a Police Report right there on the spot, but apparently Ted Wheeler gave them Stand Down Orders, once again. #NoHoldsBarred pic.twitter.com/1l1mBssBSY

In an apparent reference to the unconscious woman shown in one of the clips, police announced in a statement they had received reports “that a subject was unconscious in the area, but officers did not locate that person.”

When police arrived, the two groups had already separated.

“Officers are aware there may be video of the event and are interested in that video footage,” Portland police said.

“This is an open investigation and follow-up is planned to identify if crimes were committed and if arrests are appropriate. The Portland Police Bureau will review video and images of today’s event in an attempt to identify people who were involved in criminal activity.”

Police had initially sounded a hopeful note in praising the day’s events as peaceful.

“We asked participants to peacefully and safely demonstrate and they did,” Police Chief Danielle Outlaw said in the first statement. “Those involved demonstrated the ability to exercise their rights in a peaceful manner, which we appreciate. Thanks to all those involved in the planning and collaboration on the law enforcement and partner side to make this a successful day.”

Portland has become a hotbed of violent confrontations in recent years between the left and right.