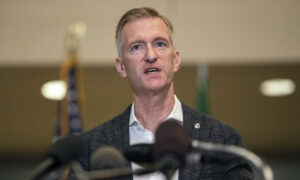 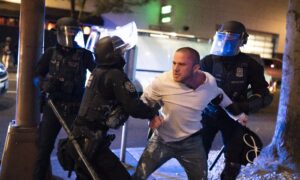 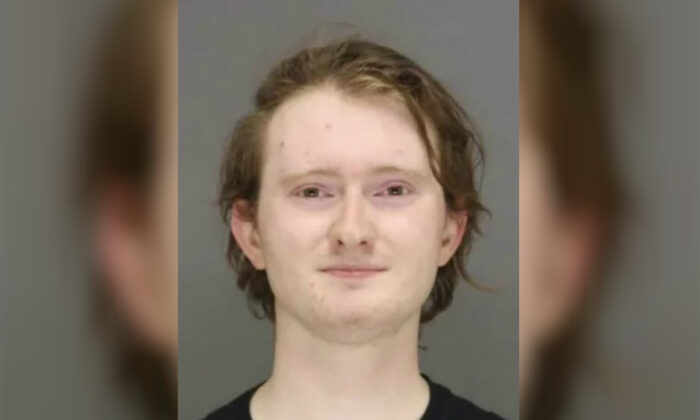 A known, violent member of the far-left Antifa network was arrested over the weekend in Wisconsin with a flamethrower and smoke grenades, police said.

Matthew Banta, 23, of Neenah, was part of a group wielding baseball bats or metal pipes and carrying an Antifa flag in Green Bay on Aug. 29 after 9 p.m., during an unlawful assembly, according to a criminal complaint obtained by The Epoch Times.

Officers found two military-grade smoke grenades, two firework rockets, a bundle of rockets banded together with plastic wrap, and a flamethrower with a propane tank on Banta’s person and in his bags.

Banta said he was going to a protest but denied that he was trying to incite a riot and said he was unaware of the protest being declared an unlawful assembly because of the criminal acts that people were engaged in.

After the arrest, Banta was identified as “Commander Red” from a bulletin sent through department email.

“Matthew is known to be a violent Antifa member who incites violence in otherwise relatively peaceful protests,” according to the complaint.

Court records show Banta was charged with second-degree recklessly endangering public safety, use of a dangerous weapon, and two counts of battery or threat to judge, prosecutor, or law enforcement officer, among other charges, in Waupaca County earlier in August.

Banta was released on a $10,000 bond after a hearing on those charges. A standard condition of bond is to not possess dangerous weapons and to not commit any crime.

Banta was charged with obstructing an officer, and two counts of felony bail jumping. He faces up to 12 years, nine months in prison for the three charges. No lawyer was listed for the defendant.

Another man detained in Green Bay, Kevin Gunyon, told police officers that he was carrying a weapon for “self-defense.” He and two others were trying to gain entry to an address they didn’t belong to; the person inside told officers later that he didn’t know who the people were.

Antifa is a far-left, anarcho-communist group linked to violence at riots across the United States. Members have contributed to the continued unrest in Portland.

Noting how many items Banta was armed with, he added: “That’s not peaceful protest to me, when you come with that kind of gear.”

People have peacefully protested in Green Bay for years, he said. The line is drawn when people start committing criminal acts.

Police have footage of people with Antifa flags from earlier in the summer.

Black Lives United-Green Bay, a community group part of the Black Lives Matter movement, said in a statement released Monday in response to news inquiries that the group members are not discouraged by the way people “are grieving.”

“We don’t see rioting as taking away from our message because it actually reinforces the state of emergency that we are in. Folks out in the streets screaming #BlackLivesMatter and their names—we see you and the risk you are taking on behalf of all of us. We honor the lives of Black people taken from us by law enforcement,” the group said.

“We say their names and continue to hold our government, elected officials, allies and adversaries accountable to these murders and attempted murders until there are policies passed that uplift Black folks and invest in our communities. We will eradicate white supremacy. We will build local power to intervene in violence inflicted on Black communities by state and vigilantes. It is our duty.”