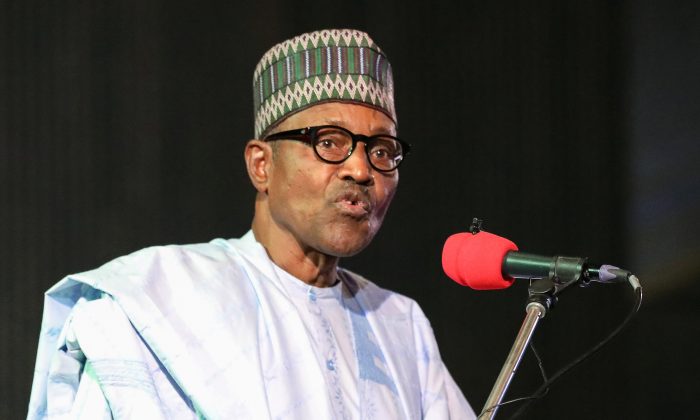 LAGOS, Nigeria—Amakiri Ibisaki went to her job at the Independent National Electoral Commission (INEC), Nigeria’s electoral umpire, during the presidential and national assembly elections on Feb. 23 but she didn’t return home.

Killed by a stray bullet during electoral violence in Rivers State of Nigeria, she joined the long list of casualties at the polls that were marred by violence, faulty machines, poor logistics, and reports of mass rigging in many parts of the country.

Despite postponing the election by a week to address all loopholes, the electoral commission failed to live up to expectations, observers said.

Voters in separate interviews with The Epoch Times complained that not only did election materials not arrive at their polling units in time, but the smart-card readers used to verify the voter’s identity malfunctioned, causing further delays.

After it was announced that Muhammadu Buhari, the 76-year-old incumbent of the ruling All Progressives Congress party, had won the election, his supporters took to the streets to celebrate, but there was no joy for those who lost loved ones amid the violence.

“It is very unfortunate that Ibisaki died while doing her job. … The news of losing a colleague in the line of duty is saddening,” said a staff member at the INEC who preferred not to give his name.

In Lagos, which has 5.4 million registered voters, the polls were characterized by violence and irregularities.

Video footage flooded the internet showing multiple voting by unidentified persons. Sharing one of those videos on his Twitter account, Farooq Kperogi, a Nigerian academic and staunch critic of the ruling party, wrote, “Why would anyone accept the outcome of an election like this? Democracy is supposed to be one person, one vote.”

Eyewitnesses who spoke with The Epoch Times recounted how people they described as “thugs” hired by political parties invaded polling booths in the Okota and Shomolu areas of Lagos, carting away ballot boxes and disrupting the polls. Many people were unable to vote as a result.

“Political thugs disrupted two large polling units in Lafia, Nasarawa State, where I voted. In the end, INEC canceled the results of both units, citing malpractice,” said a source who wanted to remain anonymous.

It was the same story in Kano which had 6.5 million voters, the highest number in the country. Human rights activist Garba Maryam, who monitored the poll, expressed disappointment over the vote-buying and voter apathy that characterized the poll in the north.

“People were being paid N500 (less than $2) to vote. Money and plain-clothed security personnel played a significant role,” she said.

Despite allegations of voter fraud and other irregularities, Buhari described the election as “free and fair” in his national broadcast after his win was announced. However, his main opponent, Atiku Abubakar of the People’s Democratic Party, has called it a “sham election” and said he plans to challenge the results in court, a process that will dominate Nigerian politics for months.

While Buhari’s supporters have described his victory as a boost for the fight against corruption, his critics, including Maryam, fear that insecurity in the volatile North East will continue.

“Nigerians voted the former President Goodluck Jonathan out in 2015 for incompetence in tackling insecurity in the North East, and it is unfortunate Nigerians have voted in Buhari despite the fact that insecurity persists,” he says.

E-Voting as a Solution

Fear of anarchy has heightened in the opposition stronghold states in the South-South and South-East zones where voters were disenfranchised and ballot boxes and papers were burned. Observers are concerned that this will affect turnout for the next election.

Ahead of the governorship election scheduled for March 9, stakeholders have continued to agitate for an improvement in the electoral process. Activists are calling for e-voting to prevent the vote-rigging and violence that have become the norm.

Economics professor Segun Ajibola said it is ridiculous for Nigeria to operate a manual system of voting, and described the current system as old-fashioned and frustrating. He said the results of using a manual voting system have been catastrophic.

“Nigeria is too big to be using a manual voting method, especially because the country has millions of registered voters. It will be cumbersome, defective, and frustrating to continue in this way,” he said in an interview.

“E-voting is the most effective way to stop the problem,” he added. “In the long run, e-voting would reduce the cost of running elections in Nigeria. It would also curb impunity. It might be expensive to adopt better technologies to improve our electoral process, but it would be worthwhile and we should do it.”

Justice for Those Killed

The Situation Room, a group of more than 70 civil society organizations that monitored the election across the country, said at least 39 people lost their lives during the election.

In a statement, the organizations called for the arrest and prosecution of the perpetrators of electoral violence while advocating for improvement in the March 9 governorship election.

“While we acknowledge the efforts of INEC to conduct this election, we would like to emphasize that there were lapses in this election that did not need to happen,” the statement said.

“The Situation Room reiterates that no election in Nigeria should cost the life of any citizen and condemns in the strongest terms the lack of empathy, concern, and sensitivity by the police class regarding these events.”