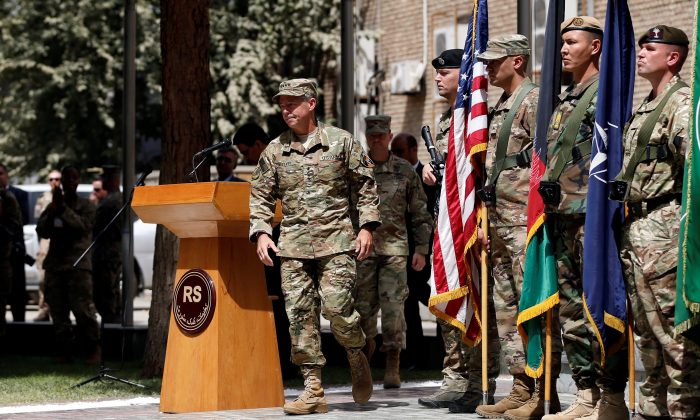 Representatives of Taliban insurgents and U.S. forces in Afghanistan engaged in a rare public spat on social media on May 2 about U.S. Gen. Scott Miller’s warning that continued violence from the Taliban would stall the Afghan peace process.

Miller, commander of U.S. forces and the NATO-led coalition in the region, warned Taliban officials on April 28 that they would face consequences if violence continued, reported Stars and Stripes.

On May 2, U.S. Forces–Afghanistan spokesman Col. Sonny Leggett wrote a letter to Taliban spokesman Zabihullah Mujahid after Mujahid challenged whether Miller’s comments were a warning for war or for peace.

@Zabehulah_M33 You asked for clarity on Gen Miller’s calls for the Taliban to reduce violence. Let's clarify: The people of #Afghanistan want #peace. The world has asked the #Taliban to cease violence and focus on #COVID19. Now is the time to stop the violence. @suhailshaheen1 pic.twitter.com/9EUrUh67Bt

“We need them to reduce violence and … give political leadership on all sides an opportunity to determine the peaceful way forward,” Miller said as reported by Stars and Stripes.

The same message has been shared consistently by Miller with Taliban leaders, Leggett said.

Leggett stressed in his letter that reducing violence is “an absolute necessity” on the road to peace, and the leaders of all military forces—the Afghan Security Forces, Taliban fighters, and the NATO-led coalition—are responsible for it. “Restraint produces restraint,” he wrote.

A senior Western security official said on condition of anonymity, according to Reuters: “Taliban fighters are not hitting large government centers or cities. They are focusing on villages in Herat, Kabul, Kandahar, and Balkh provinces that have reported the highest number of coronavirus cases.”

U.S. forces have recognized a “reduction of violence against cities and against coalition forces,” Leggett said. But the mutual commitment agreed to during negotiations between the United States and the Taliban signed on Feb. 29 requires all sides to reduce violence by 80 percent “to pave the way for peace talks.”

“To date, the U.S. has not conducted a single offensive strike or operation since before the start of the reduction of violence period,” Leggett wrote in the letter.

Pentagon spokesman Jonathan Hoffman told reporters that the United States has continued with “defensive attacks to help defend our partners in the area,” and will continue to do that, according to Reuters.

Miller’s statement “was not a threat for war” but “the hope for peace,” Leggett wrote.

The day after Miller’s comments, three people were killed and 15 wounded in a suicide bombing near Kabul, the capital of Afghanistan. That same day, another bombing attack in Kabul injured three more civilians. It wasn’t immediately clear who was behind the blast.

On May 4, the Taliban claimed responsibility for a bombing the night before at a military center in Afghanistan ‘s Helmand Province, where at least 150 members of the Afghan army and intelligence wing were stationed.

According to data from a Western military source seen by Reuters, the Taliban has mounted more than 4,500 attacks since signing the peace deal with the United States, although two Taliban spokesmen said the group wasn’t responsible for the majority of those attacks.

The United States agreed in the deal to withdraw U.S.-led foreign forces if the Taliban remains committed to preventing terrorists from using Afghanistan as a staging ground for their attacks.