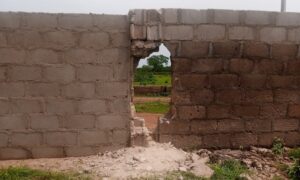 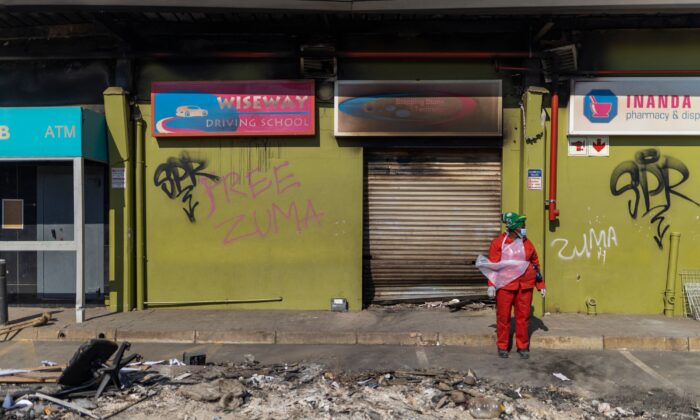 Following several days of looting and unrest, a woman can be seen during a cleaning operation of the Dube Village Mall in Durban next to "Free Zuma" graffiti on July 17, 2021. (Guillem Sartorio/AFP via Getty Images)
Africa

Violence in South Africa Occurs Amid Signs of Resilience: Analysts

JOHANNESBURG—He didn’t have to say anything, the looter wearing black jeans, sneakers slippery with soda, and a sweat-and-dirt-stained white T-shirt. It was already shining in his eyes. But as he left the burning mall, he laughed.

“For the first time in my life, I feel free,” he told The Epoch Times.

He was 20, he said. So he’d never known apartheid. He was one of the so-called Born Frees, the generation birthed after Nelson Mandela’s African National Congress (ANC) swept to power with an overwhelming majority in South Africa’s first multiracial polls, in 1994.

“We are the rainbow nation of God,” Archbishop Desmond Tutu would later proclaim, celebrating the country’s glorious failure to deliver the racial conflagration much of the world had predicted for it in the aftermath of apartheid’s demise.

But the anarchic scenes—of looting, blockading highways, and torching warehouses and factories, of vigilantes opening fire on advancing hordes, and of violence that has claimed more than 200 lives—have resurrected the same questions, the same expectations, of South Africa that followed Mandela’s release from prison in 1990. This, they say, is the beginning of the end for the country, the final leg of its journey toward being yet another failed African state.

The mayhem followed the jailing of former President Jacob Zuma for contempt of court following his refusal to testify at an inquiry into corruption that happened when he led South Africa between 2009 and 2018.

But far bigger problems than the schism in the ANC are fertile ground for future civil unrest. One of them, according to analysts, is what they describe as the country’s real “ticking time-bomb”: Out of a population of 60 million, more than 10 million young people who should be working don’t have jobs.

Some were at the forefront of the recent chaos.

This, Frans Cronje of the Center for Risk Analysis in Johannesburg told The Epoch Times, is one of several crises, which include increasing inequality, mass unemployment, and crumbling public education and health systems, set to cause “blow-ups” of public violence in South Africa’s near future.

“These young people wake up every morning not sure what the day’s going to hold. They don’t have that dignity of labor, of earning something, going back to their families and saying, ‘We did this for you.’ That’s a powerful social force,” Cronje said.

Cronje says it’s an easy force to mobilize because it’s poor, angry, reckless, restless, hopeless, and strong, with nothing to lose—which makes it “very, very dangerous.”

But both Cronje, an arch-conservative, and Melanie Verwoerd, an astute liberal South African analyst, say it’s much too early to write the country off.

“I think the recent unrest in South Africa offers a few very important lessons to many other countries that are struggling with similar issues, like racism,” Verwoerd, a former ANC member of parliament, told The Epoch Times.

She describes the violence as a “wake-up call” to the nation to address certain socioeconomic issues before it’s too late.

“In a bizarre way, South Africa can be proud of how we came through it, because if ever there was a time that the country could’ve completely blown up, it was now,” she said.

“Institutions, as weak as some of them are, held. The security forces did not revolt. Most importantly, the people, as poor as most are, did not join the anarchy. That’s what people expected to happen in 1994. That’s what they’re expecting again now.”

South Africa is on the cusp of surprising the world once again—when it votes the ANC out of power within the next decade, according to Cronje. Mandela’s party has been winning elections with dwindling majorities since the great man passed power to Thabo Mbeki in 1999.

The ANC’s defeat, in Cronje’s view, will herald the emergence of a new political formation that will see the “economic pragmatism and fiscal prudence” that sparked growth and employment under Mandela and Mbeki shaping the country, once again, into one of the world’s “most exciting” emerging markets.

“The endgame here is deceptively simple: There’ll be periodic blow-ups like we’ve just seen until the ANC simply loses an election, perfectly peacefully and democratically. And that’s going to be an inflection point towards future reform,” he said.

Whatever happens, Verwoerd says, South Africa will remain a place that the world pays attention to, because it wrestles with many modern global dilemmas.

“We deal with the issues of inequality, we deal with racial challenges and diversity; we deal with the issues of a very fragmented and problematic past,” she said. “Then we deal with all the other issues like climate change, the pandemic. And all of these are amplified because we don’t have the economic power to buffer the fallouts from them. Thus, it is always important to see how South Africa reacts, and yes, I do believe it remains a sort of symbol for the rest of the world.