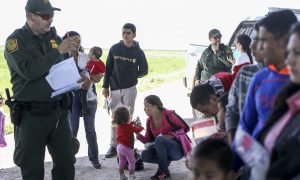 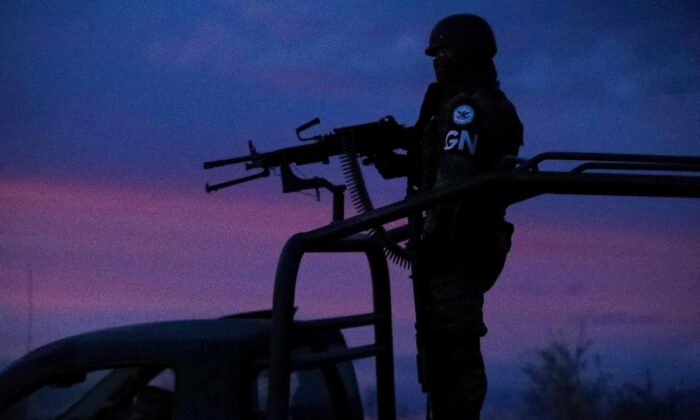 Members of the National Guard guard a caravan of members of US Mormon family Lebaron as they arrive in a convoy from the US to the municipality of Bavispe, in the Sonora mountain range, Mexico, on November 6, 2019. - Mexico alleged on November 6 that a drug cartel called "La Linea" massacred nine Mormon women and children in a case of mistaken identity, but devastated relatives insisted their loved ones were deliberately targeted. (Photo by Herika Martinez / AFP) (Photo by HERIKA MARTINEZ/AFP via Getty Images)
Viewpoints

My old girlfriend, a lovely young lady from Houston, used to speak glowingly about trips to beachfront resorts in Cancún, Mexico. That was in the late 1970s.

In recent years, at least four drug cartels have been competing to dominate the cocaine-smuggling lines from South America to Cancún, and in early 2018, Gulf Cartel boss Alfonso Contreras Espinoza was shot dead along with his wife in a Cancún clinic. Subsequently, the Gulf Cartel was pushed out, violently, by the Jalisco New Generation Cartel.

It doesn’t help that official corruption in the surrounding state of Quintana Roo, specifically under the rule of then-Gov. Roberto Borge, had created a climate of misdeeds and inefficiencies. Under the Borge administration, hotel- and land-owners in Tulum were coerced into surrendering their properties in dubious schemes involving corrupt notaries and judges.

In Playa del Carmen, near Cancún, an explosion on a tourist ferry in 2018 left 19 Mexicans and five Americans injured, causing the U.S. government to issue a security warning for Playa del Carmen and shut down its nearby consulate for a time.

On the outskirts of Cancún, a giant pothole hasn’t been repaired in some 15 years, deteriorating to the point that a zipline was installed over it just for fun. Clearly, official corruption, misallocation of funds, and drug-related violence have rendered many resort areas unsafe and inefficient.

Low police pay has left 116,000 police jobs unfilled as of 2018, so the proliferation of gangs in Mexico has had a devastating effect.

As Rubén Salazar, director of policy and communications consultancy Etellekt, told Time magazine, “organized crime in Mexico … [is] no longer only drug trafficking groups but also gangs with other origins.”

So while the Sinaloa cartel specializes in fentanyl production (a synthetic opioid that’s 25 to 50 times stronger than heroin), there are also train-robbing gangs, extortion gangs, and oil-siphoning gangs (tapping into pipelines). And corrupt politicians only perpetuate the rampant lawlessness—in 2017, 12 mayors in the state of Puebla were arrested for suspected involvement in a fuel-stealing ring.

The slaughter earlier this month of nine American Mormons in northern Mexico—in the mountains between the Mexican states of Sonora and Chihuahua—was incredibly violent, leaving behind bullet-riddled, burned cars and charred remains. The families, living in a Mormon community in Mexico, have been so wracked by this attack and many others in recent years that there have been as many as 90 federales (federal police) protecting them at various intervals.

Jorge Castañeda, a former Mexican foreign minister, surmised that one of the families may have been targeted in this attack due to the family’s history of standing up to drug cartel violence.

In response to this most recent slaughter of American Mormons in the Sonoran hills, U.S. Sen. Ben Sasse (R-Neb.) warned that “Mexico is dangerously close to being a failed state,” citing the habit of Mexican politicians looking the other way while drug cartels bribe their way to power.

“[Innocent] American lives have been lost again,” Sasse said in a statement. “The Mexican government must partner with U.S. intelligence and law enforcement agencies to wage a full-scale offensive against these butchers.”

For his part, President Donald Trump called for the United States and Mexico to team up in a “war on the drug cartels”—an offer not yet taken up by Mexico’s president.

Sabin Geyman was a journalist in Taiwan in the early 1990s, and a longtime analyst for the U.S. Department of Defense. His recent book is “Reaping the Whirlwind: Broken Foundations, Lukewarmness, and Impending Judgment.”

Sabin Geyman
Follow
Sabin Geyman has been a journalist in Taiwan and a longtime language analyst for the US Department of Defense. His recent book, Reaping the Whirlwind: Broken Foundations, Lukewarmness, and Impending Judgment, offers a refreshing assay of US culture in terms of Western civilization, church history, and Bible prophecy.
TOP NEWS