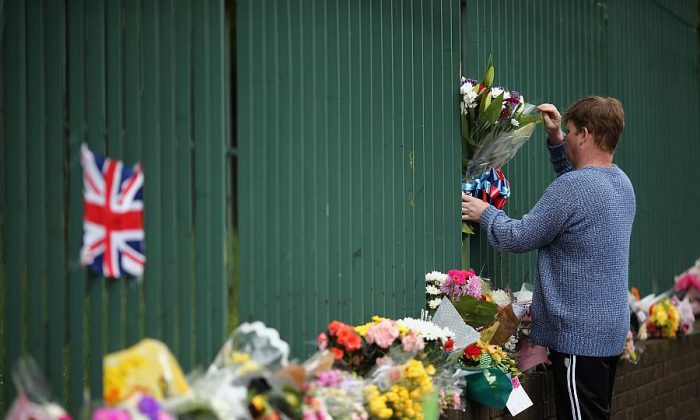 Members of the community lay flowers in London on May 24, 2013. The pictured location is near Woolwich Army Barracks and is the scene where Drummer Lee Rigby of the 2nd Battalion the Royal Regiment of Fusiliers was killed by suspected Islamists. (Dan Kitwood/Getty Images)
Opinion

Violence in Britain: How the War on Terror Criminalizes Ordinary People

By Vicki Sentas, The Conversation

It is now accepted that the war on terror has generated an extensive repertoire of its very own terror. Drone strikes resulting in extrajudicial killings, rendition, and torture—zones of exception like Guantanamo Bay come to mind, as does Britain’s complicity in extraordinary rendition and torture.

Then there are the normalized, everyday forms of terror operational in Britain that rarely register as state-sanctioned violence because they are understood to keep us safe. This includes MI5 and police raids without charge, compulsory schedule 7 detention and questioning, and stop and search of communities made suspect.

Even less visible than state violence is the global regime of targeted sanctions against non-state armed actors and those even indirectly connected to them. U.N. Security Council Resolution 1373 requires states to establish their own domestic banning regimes in order to criminalize the support and financing for terrorism. Variously referred to as “blacklisting,” “banning,” or “proscription,” the designation of organizations and individuals as terrorist has been under scrutiny for bearing all the hallmarks of authoritarian dictatorships.

These forms of “lawfare,” including the Terrorism Act 2000 (U.K.), criminalize diverse forms of association and support, without requiring intentional acts of violence against civilians. This creates serious consequences for many diaspora in the U.K.—including Tamils, Kurds, Baluch, and Palestinians—who remain connected to armed struggles for self-determination by virtue of being a people with a shared historical and political culture.

Terrorist listing makes no distinction between armed conflicts and terrorism. Worse, listing transforms diverse armed conflicts into terrorism in spite of whether armed groups are fighting an authoritarian regime or responding to state terror. Clearly, many non-state armed groups have terrorized and killed civilians and breached the laws of war. But by labeling non-state actors as a priori terrorists, the political claims of non-state actors, and the root causes of armed conflicts, are denied and diverse forms of state terror are legitimated as “counterterrorism.”

This effect has been described by international legal jurist Antonio Cassese as institutionalized violence. Banning organizations is a tool of British foreign policy, which functions as institutionalized state violence in three key ways: firstly by denying the application of international law and principles of self-determination; secondly, by foreclosing opportunities for peaceful settlement of conflict; and thirdly, by legitimating and facilitating state terror and repressions and in some cases the war crimes of other states.

The U.K. has been proscribing organizations since listing Northern Irish groups, most notably through the Prevention of Terrorism Act 1974. More than 60 militant non-state actors are currently banned in the U.K. (as of April 2014). Some of these actors have used armed conflict to further political claims for statehood, regional autonomy or ethno-cultural rights, and have a broad support base—for example, the Baluch, Palestinians, Tamils, Basque, among other peoples.

Some non-state armed groups (and nation states) breach the laws of war by targeting civilians. But listing does nothing to stop the use of terror by either side. The idea is that by criminalizing the broadest range of relationships connected to armed conflict, Britain can delegitimize the organization and eradicate its support base. What does this look like when the support base for an armed conflict demands recognition of minority cultures and languages, accountability for state crimes, and an end to conflict? Let’s take the example of how the Kurdish struggle for self-determination in Turkey has been transformed into “terrorism.”

The Kurdistan Workers’ Party (PKK) is listed by Britain as a terrorist organization, yet the PKK is currently engaged in fragile negotiations for peace with Turkey. Meanwhile, listing of the PKK as terrorist by the international community has given Turkey the confidence and legitimacy to embark on a mass criminalization of Kurdish civil society. Between 2009 and the start of 2013, almost 40,000 people were prosecuted for “membership of a terrorist organization” in Turkey, according to government statistics.

In its campaign to urge the British government to lift its ban against the PKK, the campaign group Peace in Kurdistan argues that the ban “distorts the whole political process by ensuring that anyone who expresses an opinion on controversial issues in Turkey can be held to be an associate of terrorism and prosecuted with the full force of a law that is as indiscriminate as it is unjust.”

In Britain, Kurds are routinely criminalized and terrorized by the fact of this proscription, but no one has been convicted of any offenses. This is because the Home Office identifies “disruption” of forms of association and material support, rather than prosecution, as the key object of the proscription regime. The U.K. positions itself “at the forefront of EU member states’ action against the PKK.” Kurdish activists are routinely harassed by police and intelligence agencies in the U.K., often as part of coordinated operations targeting Kurds across Europe.

For example, in 2011, more than a dozen Kurds were sent the message by MI5 that their fundraising for charities, campaign work, and their organizing in community centers should stop, or they would face deportation or criminal charges. On Jan. 10, 2013, Kurdish families traveling to Paris were detained for seven hours at a Dover crossing, under the notorious schedule 7 of the Terrorism Act 2000, which allows for detention and questioning on suspicion of terrorism without reasonable cause or access to the usual legal rights. The families were traveling to attend a demonstration to commemorate the assassination of three Kurdish activists in which the Turkish state is allegedly implicated. The significant effects of routine, everyday forms of arbitrary state interference are to disrupt collective, political life.

Proscription laws seek to disrupt the collective organization of Kurdish people because they are understood to “legitimate” the PKKs political claims and, therefore, they can only be understood as supporting violence. More broadly, the proscription regime as it is constituted globally means that G-8 states claiming democratic credentials create the conditions for state terror by less powerful nations.

Proscription creates an international regime in which some states are empowered to use more repressive tactics against movements for self-determination. The British state, among other states that ban armed conflicts, deserves sustained attention for its role in depoliticizing self-determination movements and legitimizing and therefore extending state violence elsewhere.

Vicki Sentas is a lecturer in law at UNSW Australia. This article previously published in theconversation.com