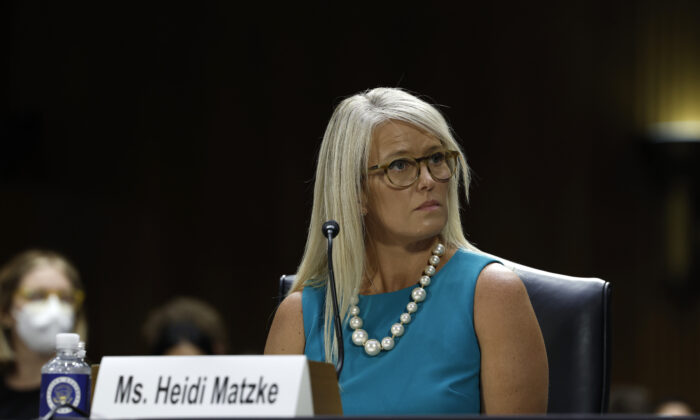 A pro-life women’s medical clinic in California has spent $150,000 to boost its security in the face of overwhelming violence following the Supreme Court’s abortion decision overturning Roe v. Wade, according to the facility’s executive director.

“Pregnancy care centers from coast to coast are being targeted for violent assaults of vandalism, and hateful attacks online and in the media,” Heidi Matzke, executive director of the Alternatives Pregnancy Center in Sacramento, California, told a Senate hearing on July 12.

“Just last week,” she added, “a man approached our care center with an armed machete.”

Threatened by violence, the clinic has taken steps to secure its premises and safeguard its staff, Matzke said.

“We have been forced to hire 24-hour on-site security. We have had to reinforce doors and bullet-proof our walls. We’ve had to paint our building with anti-graffiti coating,” she continued.

“We’ve added cameras, armed our staff with pepper spray, and stopped running our mobile clinic because of threats of violence.”

“We have been forced to expend valuable resources, resources for women of up to $150,000 just to protect ourselves. Why? Because we offer free care to women,” Matzke said.

“The amount of money we’ve had to spend to protect ourselves just so we can offer free services to women is unbelievable,” she said.

Matzke said that “violence has been overwhelming” for pregnancy centers in her area since the Supreme Court overturned the 1973 Roe v. Wade ruling.

There have been at least 57 attacks on pro-life pregnancy centers since the Supreme Court’s decision was leaked on May 2, according to the nonprofit Catholic Vote. In Yuba City, located north of Sacramento, a pregnancy resource clinic was vandalized overnight between June 27 and June 28.

Another recent vandalization incident happened at a Massachusetts pregnancy clinic on July 7, when its front steps were spray-painted with the words “Jane’s Revenge,” and its door and windows were damaged.

“It is the federal government’s job to protect the American people against violent acts, threats, and persecution,” Texas Attorney General Ken Paxton said in a statement accompanying the letter.

“This should not change if those citizens are conservative, pro-life, or align with a political party this administration opposes.”

“Attorney General Bonta issued a misleading consumer alert about California’s pregnancy care centers,” Matzke said according to her prepared statement (pdf). “A great deal of misinformation has been spread about pregnancy centers, including public statements made by the administration.”

During the hearing, Matzke talked extensively about what her clinic offers.

“When a woman comes in so afraid of what an unplanned pregnancy will mean for her life, her ambitions, her relationships, we do not urge her in that moment to make any decision,” she continued. “We listen. We try to hear her heart. We offer professional services and emotional support.”

“Whether she chooses parenting, adoption, or abortion, we will continue to be there for her for years if necessary.”