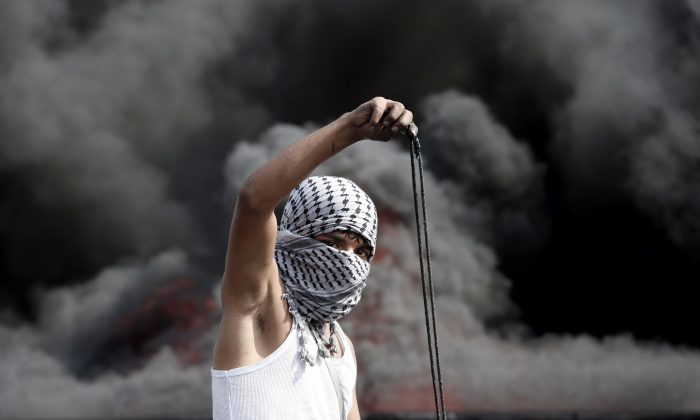 A Palestinian demonstrator prepares to throw a stone with a slingshot during clashes with Israeli security forces in the West Bank town of Al-Bireh, on the northern outskirts of Ramallah, on October 20, 2015. (THOMAS COEX/AFP/Getty Images)
Middle East

A knife, held in the air and covered with blood, is the symbol of the wave of recent Palestinian attacks against Israelis. The image is a new symbol in what appears to be an endless stream of violence in the country, many of them stabbings.

Similar to the Arab Spring revolutions in 2011 and propaganda efforts carried out by ISIS, the violence against Israelis in recent weeks appears to be spreading via Twitter and Facebook instead of being organized by political factions.

The distribution of cartoons as well as photos and videos of violence and death have been rampant across social media platforms.

The cartoons, some originally posted on Arab media outlets, are used to relate to the daily attacks. One cartoon shows a masked, butcher knife-wielding assailant readying his blade to hack into an orthodox Jewish man. Another depicts Prime Minister Benjamin Netanyahu with a knife sticking out of his head, and it is captioned: “Dancing to the Melody of the Intifada,” according to the Anti-Defamation League.

Some of these images have featured Twitter hashtags, including #intifadaAlAqsa and #intifadaPalestina, respectively referring to the Al-Asqa mosque, located in Jerusalem’s Old City, and Palestine. Some have used the hashtags to accompany photos of dead Palestinians, calling them martyrs, heroes, or victims of Israeli brutality.

“They are the soldiers of Allah and heroes of the earth #Palestine,” wrote one Twitter user in supporting perpetrators of the stabbing attacks.

“Jews are a very peaceful people. But like any other people, they must have the right to defend themselves and fight terror,” added another Twitter user, describing themselves as a supporter of Israel.

In recent years, intense debates on social media sites often flare up as Israeli–Palestinian violence rises, including during the 2014 Israel–Gaza war, sometimes even including officials or fighters on both sides of the conflict. This contrasts with coverage of the second intifada, from 2000 to 2005, which was dominated by mainstream media outlets.

This time around, the Israeli government has gotten involved, posting videos of its own narrative on the numerous attacks. For example, the Israeli Ministry of Foreign Affairs posted a 45-second clip on Facebook called “What Palestinian Terror and ISIS Have in Common.” The video states that the knife attackers “use the very same methods used by ISIS’s notorious terrorists” before flatly stating: “You won’t be able to tell any difference between them.”

Another heavily viewed video, titled “Stop Palestinian Hate Speech,” displays excerpts from several Palestinian-made videos, including information on how to properly stab someone or on how to make a Molotov cocktail.

Perhaps the most significant social media event was when 13-year-old Ahmad Manasra was filmed on Oct. 13 via a smartphone lying on the ground, bleeding from his head, while an Israeli cusses at him and tells him to die. Manasra was turned into focal point by both Israelis and Palestinians after he and his 15-year-old cousin stabbed a 13-year-old Israeli boy riding his bike in Jerusalem.

Palestinian Authority President Mahmoud Abbas accused the Israelis of killing the boy, while Netanyahu accused Abbas of lying. Manasra was taken to a hospital and, upon his discharge two days ago, arrested.

And Facebook itself has become a target amid the violence. On Sunday, Israeli political activist Rotem Gez admitted to vandalizing Facebook’s Israeli headquarters with red graffiti and the words, “blood on our hands” and “Stop FB Terror,” according to local media outlet Arutz Sheva.

“We decided to do this because you can’t write anything on Facebook’s Wall (on the site), so we transferred the protest to the company’s physical wall, outside the network,” Gez explained.

Prime Minister Netanyahu seemed to reference the glorification of violence on social media, using it as an opportunity to go after Palestinian Authority President Mahmoud Abbas.

“He incites all time,” Netanyahu said in a televised statement on Tuesday, referring to Abbas. “He and his Fatah partners and the official websites of the [Palestinian Authority] incite day in and day out on social networks,” according to the Times of Israel.