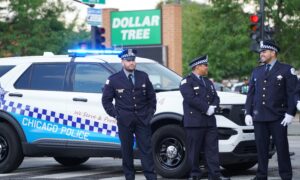 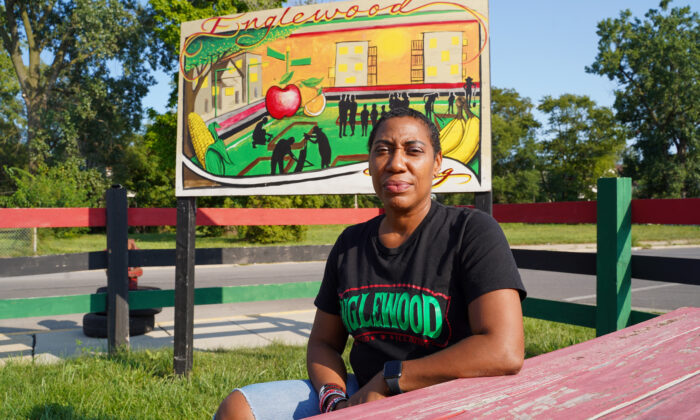 Asiaha Butler sits inside the peaceful community space she built over the years in the Englewood neighborhood on the South Side of Chicago, on Sept. 10, 2021. (Cara Ding/The Epoch Times)
Illinois

CHICAGO—Chicago, once a promised land for millions of blacks fleeing the Jim Crow South, has seen a steady decrease in the black population since 1980.

The prolonged black exodus just reached a milestone. The newly released census data concludes that blacks, with a 10 percent population loss between 2010 and 2020, are no longer the most populous minority group in Chicago; that title, along with the political power that comes with it, goes to the growing Hispanic population.

Most blacks live in poor communities infested with crime and drugs on the South and West Side of Chicago. A dozen locals told The Epoch Times the reverse black migration was fueled by the same desire to better themselves and their families, and by the most fundamental human desire—to stay alive.

“The bullets have no eyes. They are flying everywhere,” Shunte Campbell, a mother of three who moved her family out of Chicago to west suburban Yorkville in 2017, told The Epoch Times.

In early 2017, Campbell drove home from a birthday party to find an active shootout in front of her house in the North Lawndale neighborhood. Ducking down in the car, she called her three daughters—the youngest was 10 at the time—and was relieved to learn they were hiding in the bathtub—a survival tip Campbell had passed on to them.

That was the last straw for her, Campbell said. Within six weeks, she moved her family to Yorkville, a suburb west of Chicago. The family lives on Campbell’s governmental disability checks and income from her two daughters, one working at McDonald’s and the other at a salon.

“It’s quiet here,” Campbell said of Yorkville. “I’ve been here almost five years now and I’ve yet to hear gunshots.” At least 20 more black families moved into her neighborhood this year, she said.

Campbell’s grandmother migrated from Mississippi to Chicago decades ago, part of a movement dubbed as the Great Migration, which saw nearly 6 million Southern blacks move up to northern industrial cities, such as Chicago, for low-skill factory jobs and a better life for their families.

But when manufacturing began its downturn in the latter half of the 20th century, so began the steep downturn of the black communities, according to Harvard sociologist William Julius Wilson. In his book “When Work Disappears,” he examined how joblessness gave birth to the problems plaguing urban black ghettos today, such as crime, poverty, family breakdown, failing schools, and drugs.

Like Campbell, the majority of the blacks in reverse migration did not move back to the South, according to a University of Illinois–Chicago study that examines demographic data between 2005 and 2016. Instead, they moved to nearby suburbs in Illinois and Indiana, retaining ties with friends and relatives in the old Chicago neighborhoods.

Dominica Jimenez, who had moved to suburban South Holland in 2018, drove back to Chicago in the early morning of Sept. 12, after learning her cousin was shot while driving northbound on a major avenue in the Garfield Park neighborhood on the West Side. At least four dozen of family members gathered at the crime scene.

“This is a typical day on the West Side. Innocent people got caught in crossfire,” Jimenez told The Epoch Times at the crime scene, tears streaming down her cheeks. “That’s why I left three years ago. Just the inner-city craziness.”

Her cousin, who sustained multiple shots, was pronounced dead at the scene and detectives are investigating, according to an email from the Chicago Police Department to The Epoch Times.

Jimenez was raised in the Austin neighborhood on the West Side, which has seen the highest black population drop—at 11,824—among 77 Chicago neighborhoods between 2010 and 2020, according to an analysis of census data by The Epoch Times.

Austin is also the third most violent Chicago neighborhood this year, with 53 murders and 244 injuries. Chicago has seen 591 murders this year, the highest in a decade; 95 percent are due to gunfire.

Asiaha Butler, too, considered leaving Chicago. That was in 2008, when fights often took place in front of a house next to hers in the Englewood neighborhood; she also felt the local schools were not up to par for her daughter.

But she decided to stay; it was the place where generations of her family have been rooted after migrating from Alabama.

Now, violence still occurs on certain blocks in her neighborhood, but not on hers anymore. She owns two of the three houses still standing on her block; she also purchased a vacant lot next to them to build a peaceful community space.

Englewood, combined with West Englewood, has seen 44 murders and 245 injuries this year. The neighborhood also saw the third-highest decrease in the black population among 77 Chicago neighborhoods between 2010 and 2020.

“Even in communities like Englewood, it’s possible to create peace on your block, like I did on mine. It took me 15 years to feel safe,” Butler said. She founded a community called the Resident Association of Greater Englewood through which she spreads the message of owning and building your block.

“You don’t have to save the whole entire community. Do what you can on your block. We are a living testament that it is possible to do that,” Butler told The Epoch Times.