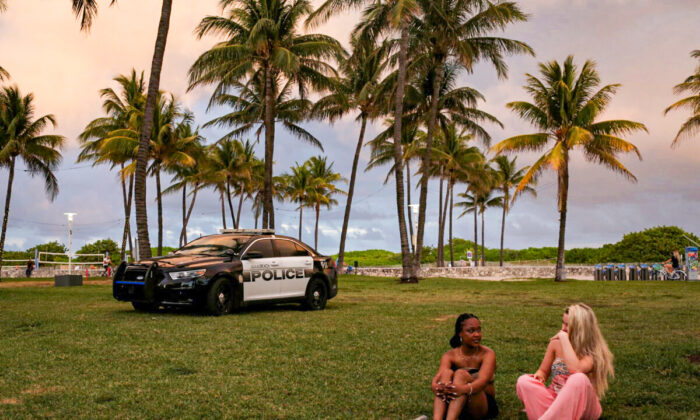 A police vehicle is seen next to people enjoying spring break, ahead of an 8pm curfew imposed by local authorities amid the COVID-19 pandemic, in Miami Beach, Florida, on March 27, 2021. (Marco Bello/Reuters)
US

Two Florida cities have enacted curfews in the wake of recent trouble and overdoses among spring break visitors.

The latest curfew was ordered by Miami Beach officials who said “after seeing a rise in violence” the city declared a state of emergency. It will begin a curfew on March 24 at 12:01 a.m. and remain in place until 6:01 a.m. March 28.

With the city commission’s approval, officials hope to implement the same curfew on March 31 through April 4.

Mayor Dan Gelber said that “tourists had created an unacceptable atmosphere across the city,” and that the city was “way past its endpoint.”

The mayor told reporters that he, along with other city officials, “don’t ask for spring break to come to Miami Beach,” but they simply “endure it.”

The curfew will be enforced for the South Beach area from the Atlantic Ocean on the east and the Biscayne Bay on the west. This area includes popular spring break locations such as Ocean Drive and the Entertainment District.

“We didn’t ask for spring break and we don’t want it,” said Gelber during a press conference.

“We can’t endure this anymore. We just simply can’t,” Gelber said. “This isn’t your father or your mother’s spring break. This is something totally different.”

Gelber said that five people were shot over the weekend of March 19 despite 371 police officers being deployed.

“Two victims that were wounded at the scene were taken to a local hospital, while doctors at another hospital reported a third person arrived there with a gunshot wound.”

All were expected to survive.

Traditionally, thousands of college students as well as other young people gather in Miami Beach and other Florida coastal cities for spring break.

This is the second year that officials for the South Florida city have declared a state of emergency due to violent outbursts from the visitors.

Another popular spring break destination New Smyrna Beach has approved a curfew for children under 18 in certain parts of the city for the next 60 days.

There’s also a curfew for groups larger than 30 people.

The curfew grew out of city concerns with “large crowds forming at the beach” when parents were dropping off their kids and leavin­g them to roam the city unattended. Officials were worried the police would not be able to “handle a large number of kids.”

Business owners and residents addressed the New Smyrna Beach Commission on March 16 to voice their concerns about how “unruly” the spring breakers have been this year.

PJ Warner said he was harassed by “kids in front of his convenience store.”

Shop owner Shai Dahan said for as long as he has had his business in New Smyrna Beach that the crowds have never been as destructive as they were during this year’s spring break.

“A lot of kids fighting here even, across the street, they broke my gate in the back,” Dahan said during the commission meeting.

Police said parents are disobeying hotel policies, which may contribute to the unruly behavior.

“Parents have come over and either [got] short-term rental houses, or hotel rooms, piled up a whole bunch of kids and walked away,” New Smyrna Beach Police Chief Mike Coffin told commissioners.

Mayor Russ Owen said he wants families to visit, but unaccompanied juveniles roaming the town causing problems for residents and businesses “will not be tolerated.”

For parents who claim that it is just “kids being kids,” Owen said he is open to having a conversation about that.

Vice Mayor Jason McGuirk is calling on parents to keep their kids in line.

“The parents are the problem … and if the parents [want to] let their kids become problems for us, I want to make it a problem for the parents,” McGuirk said.

New Smyrna Beach curfews last from 11 p.m. to 5 a.m. Sunday to Thursday. The time extends an hour to 6 a.m. on Fridays and Saturdays.

The penalties for breaking them range from a written warning, all the way up to a $100 fine.

The city of New Smyrna Beach is also working with schools to find “other strategies,” like staggering spring breaks.

On March 10 five West Point cadets were hospitalized after overdosing on fentanyl-laced cocaine in a suburb of Fort Lauderdale.  The students were staying in a residential Airbnb for spring break.

The incident is still under investigation by the Broward County Sheriff’s office and West Point is conducting its own investigation, according to officials at the academy.

Even though Fort Lauderdale saw its spring break off to a rocky start with the overdosing of the cadets, officials maintain that it is a “different vibe” than South Beach.

Commissioner Steve Glassman says he “Thanks God” that his area is nothing like South Beach.

“I don’t think there’s any comparison at all,” he told reporters at a press conference on March 19. “It’s a whole different world.

“Fort Lauderdale just has a very different vibe and different reputation. We’re not as wild and crazy as South Beach. For some reason, the crowd we have here is just more well-behaved and more respectful.”

Battalion Chief Steve Gollan said the key to a successful spring break is planning and it is the same plan year after year.

The Fort Lauderdale Police Department spreads the word about the city’s rules through social media.

Gollan said that breaking the rules could lead to an “arrest or a court summons.”

For Fort Lauderdale, the spring break began on March 4 and will continue through April 3.

So far, officers in Fort Lauderdale have made three arrests at the beach and 11 downtown related to spring break, according to police spokeswoman Casey Liening.