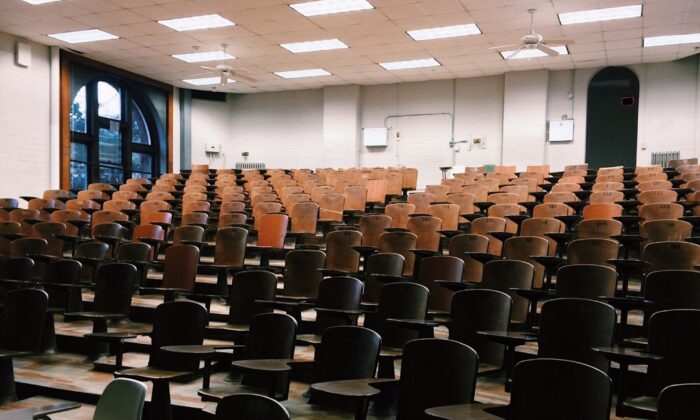 The University of Florida (UF) could lose some $100 million in state funding if professors use lectures to force their personal views onto students, the university’s president warned.

In a 20-slide presentation sent to all faculty members and staff last week, UF President Kent Fuchs said that the state could impose “large financial penalties” on any public college or university that violates House Bill 7, which was signed into law by Gov. Ron DeSantis this April and will come into effect in July.

For UF, a violation of House Bill 7 could mean the loss of $106 million in performance-based funding, which the university received from the state for the 2020–2021 academic year.

Popularly known as the “Stop WOKE Act,” House Bill 7 was a part of the DeSantis administration’s effort to promote “viewpoint diversity” in classrooms and workplaces across the state. The law targeted a set of key concepts of critical race theory (CRT), which DeSantis said has been forced upon Florida students and workers without their consent.

Specifically, the Stop WOKE Act outlaws instructions or training programs that advance or compel students or employees to accept CRT concepts, such as that one is inherently racist or oppressive because of one’s race, that anyone of a certain race should be discriminated against to achieve diversity, equity, or inclusion, or that the ideas of meritocracy or racial color blindness are invented by one particular race to oppress other races.

“At its core, the bill’s message is: ‘No one likes to be told what to think. And that includes students,'” Fuchs’ presentation read. “The theme of the bill is that instructors should not present personal beliefs about a topic as the ‘right’ point of view or compel or encourage students to adopt a specific belief.”

While the Stop WOKE Act explicitly allows discussions of topics surrounding race and sex, instructors should not do so with endorsement of a particular view, the presentation stated.

Instead, instructors are encouraged to create environments where “facts and theories are presented along with different interpretations and viewpoints,” as well as having free, open discussions that allow students to reach their own conclusions without the instructor’s bias.

A UF spokesperson said they don’t have any comment beyond what’s already in the presentation.

The Stop WOKE Act will also apply to Walt Disney Company, one of the top employers in Florida. The entertainment giant has come under fire after taking a stand against Florida’s new parental rights law, which bans classroom instruction on sexual orientation and gender identity for students in kindergarten through third grade.

Jose Castillo, a current Disney employee running for Congress in Florida as a Republican, claimed that the company has alienated a non-woke “silent majority” of employees by capitulating to a small but vocal group of woke employees who advocate radical sex and gender ideologies.

“There’s this misconception that everyone at Disney are just raging liberals, and I think that can’t be farther from the truth,” Castillo, who identified as “a strong conservative,” said in an interview with Fox News. “I have tons of people that are working for the Walt Disney Company that reach out to me daily on social media [who are conservatives].”