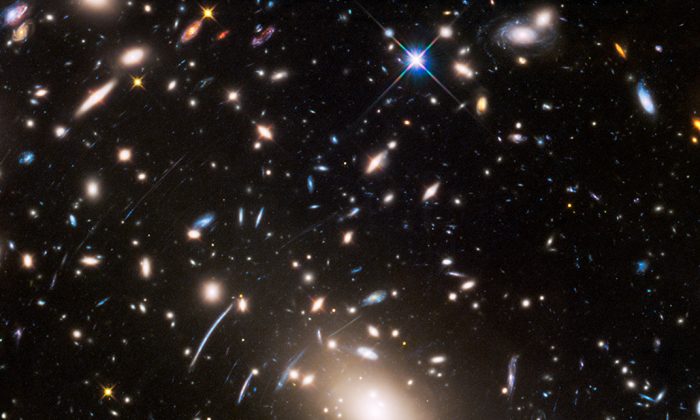 Celebrating its 50th anniversary this year, the TV series "Star Trek" has captured the public's imagination with the signature phrase, "To boldly go where no one has gone before." In the center of the image is the immense galaxy cluster Abell S1063, located 4 billion light-years away, and surrounded by magnified images of galaxies much farther. (NASA, ESA, and J. Lotz/STScI)
Beyond Science

Journey to the Origin of Matter

What exactly makes up the universe?

Science tells us that some of the tiniest building blocks constructing our world are atoms. An atom is composed of layers of electrons as well as a nucleus, which is made up of protons and neutrons. Go even deeper and you’ll find that protons and neutrons are made up of extremely tiny particles called quarks. Go deeper still and you’ll approach the neutrino—one of the tiniest particles presently known by modern science. Neutrinos are extremely tiny; so tiny that some physicists say that they do not have any mass. Millions of these particles are sent out by the sun every day, passing through our bodies as if we did not exist. If our microscopic journey continues toward an even smaller particle, we begin to enter a strange land, arousing questions that even disturb quantum physicists.

Ever since Democritus proposed the existence of “atoma,” or “indivisible particles,” over two millennia ago, man has continued to explore and consider the fundamental building blocks of the universe. In the last century, the internal structure of the atom has not only been discovered, but its division into more fundamental particles has also been realized. But just as protons, neutrons, and electrons were once believed to be the ultimate particles of the universe, the discovery of numerous smaller particles continued the journey downward. However, we are only at this point conceptually—no instrument currently exists to show the real appearance of these tiny, fundamental building blocks. So when is this journey complete?

The latest understanding in quantum physics proposes that an even more minute world exists: the superstring theory. According to physicists, particles like neutrinos, the different types of quarks, mesons, leptons, bosons, and others are the observable manifestations of tiny cords of an unimaginable smallness. The string theory proposes that these balls of subatomic yarn are vibrating constantly, and different forms of vibration appear before the eyes of an observer as different types of particles.

At this point, our exploration has arrived at a level that is very difficult to imagine: The proposed fundamental strings have an approximate diameter of one millionth of a trillionth of a trillionth of a centimeter. In fact, scientists find that these cords do not even occupy any volume of space. But for these essential building blocks not to possess a volume brings about an incredible paradox of matter … that it does not exist!

Consider that the great majority of the volume of an atom is empty space. If we could magnify an atom so that it has a diameter of 650 ft. (about two city blocks), the nucleus in the center would be the size of a grain of sand, and the electron cloud, practically imperceptible, would turn around the nucleus at the distance of one block. We find similar evidence of this microcosmic phenomenon in the macrocosm as well.

A substance that science calls “dark matter,” and is said to make up more than 90 percent of our universe, continues to be an enigma for modern astrophysicists, who, in spite of not being able to see it, have observed its gravitational influence on galaxies.

Turtles All the Way Down

In his 1979 book Broca’s Brain: Reflections on the Romance of Science, the famous astronomer Carl Sagan used an apocryphal tale to describe the nature of the universe. The story features a Western traveler questioning an Oriental philosopher. When asked to describe the nature of the world, the philosopher explains that it is a great ball resting on the back of a turtle. When the traveler asks what the turtle is resting on, the philosopher replies that another turtle is found underneath. The traveler continues to pursue what lies below, but the philosopher insists that there is nothing but more turtles all the way down. Sagan was illustrating a cosmological theory known as infinite regression in which there is no final layer of matter toward the microcosm of the macrocosm—it simply continues infinitely.

From this perspective, if we could reduce ourselves to a considerably small size and enter into a manifestation of an equally small universe—with comparatively tiny people, mountains, and rivers—would the fundamental particles of that tiny universe be the manifestation of a still smaller universe, and so on? These notions escape the reach of modern science, but not of ancient wisdom. The historical Buddha, Śākyamuni, once said that inside a grain of sand there are 3,000 worlds, and that within each one of those 3,000 worlds, there are grains of sand that also contain 3,000 worlds. Ancient Chinese philosophy gives similar accounts. But does this signify the end of our journey? Will we find nothing but more turtles below?

How far is man from identifying the fundamental building blocks of the universe? Can it ever be reached, or are we left only to imagine the surprises to be found on our way toward infinity? Tiny people, perhaps? Particles of nature extremely different from that which we know? And why all the empty space? “Everything we see in this world is an illusion” is an ancient statement from Buddhism. While many have imagined this sentence to be merely philosophical, perhaps it points the way to a greater truth in our journey to the essence of matter.