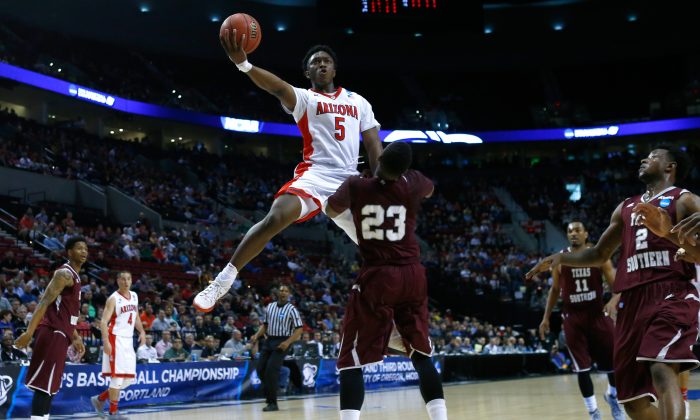 Stanley Johnson #5 of the Arizona Wildcats puts up a shot over Jason Carter #23 of the Texas Southern Tigers in the first half during the second round of the 2015 NCAA Men's Basketball Tournament at Moda Center on March 19, 2015 in Portland, Oregon. (Photo by Jonathan Ferrey/Getty Images)
News

Stanley Johnson, one of the top players in the NCAA tournament, treated fans to a monster dunk on Thursday.

Johnson’s No. 2 Arizona came out strong against No. 15 Texas Southern, and is leading 54-33 at halftime behind Johnson’s 11 points and Rondae Hollis-Jefferson’s 16 points.

With a couple of minutes left in the half, Johnson took a pass and moved toward the basket, finishing with a tremendous dunk.

The move was so powerful that it started Johnson’s name trending on Twitter.

A number of mock drafts have him going in the top 10 in the upcoming NBA draft.

Epoch Times has him going around there to the Detroit Pistons.